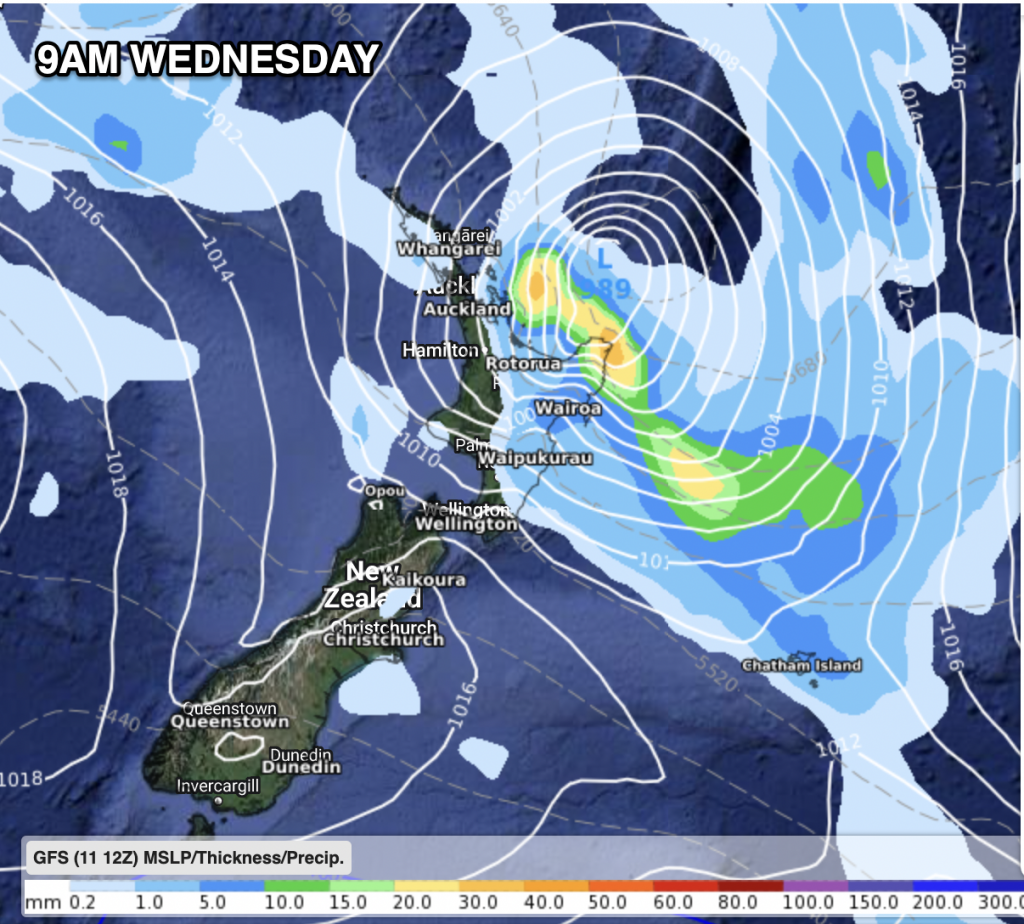 The world’s two most trusted computer models have this morning continued to align, showing Fili may track even further east of NZ, potentially missing a direct landfall near East Cape and, if so, reducing severe risks in some parts of the North Island.

It’s been a very challenging build up to Fili with the storm falling apart last Friday only to reemerge now as an extra-tropical cyclone again bringing severe weather risks. The low is now rapidly deepening as it approaches the upper North Island and will move in quickly tonight/overnight and Wednesday – before entirely clearing the North Island by Thursday morning.

GFS (America) and ECMWF (Europe) are aligning even more. Think of them as the world’s two best experts in their field, now almost totally agreeing with each other after days of intense debating.

GFS modelling has shifted Fili’s path further east – which GFS has been doing in every update for 72 hours, bringing it more inline with ECWMF. Of course, Fili the actual storm won’t know about humans and computer modelling, but this is the best thinking on the planet for tracking. IBM (our data here at WeatherWatch.co.nz) takes all these computer models and crunches it into a forecast for you, so you don’t have to spend your time on Windy comparing models. It’s our IBM forecasts that gives us confidence about rain and wind events when the modelling is hard to read.

The further east Fili goes the less severe weather will be in western and southern areas of the North Island. Fili is also moving rapidly – which also minimises rainfall totals, welcome news in regions recently flooded. But in saying that, over 150mm is still possible in parts of North Island’s east in the coming 36 to 48 hours. Perhaps the worst part of this event is that areas most recently hit by flooding, slips and road closures are again most in the firing line for damaging winds and flooding rains. The main risk zone covers Coromandel Peninsula to Bay of Plenty, East Cape to Hawke’s Bay.

THE STORM ISN’T WEAKER
Yes, the (only slightly) further eastern track means some areas – like Auckland – may not be as exposed as they could have been, but the storm itself hasn’t lost power. Severe warnings are in force by MetService and these cover a large portion of the North Island. NZ’s shape means the further this low moves eastwards, the greater the reduction in wind and rainfall totals for other areas to the west and south. If the modelling is wrong, the storm could still come in closer, which is why the MetService warnings are in place as for some this is quite a borderline event.

MetService Warnings – can now be found LIVE at WeatherWatch.co.nz.

MOST EXPOSED:
Coromandel Peninsula, Bay of Plenty, East Cape, Gisborne and Hawke’s Bay are regions most exposed. Eastern Northland and parts of Auckland and Waikato are on the edges of it, and then Cook Strait to Taranaki has a southerly wind tunnel developing with this system too. That covers a large chunk of the North Island, but it’s that north eastern corner of the North Island most exposed to both damaging winds and flooding rains: from Coromandel Peninsula to East Cape to Hawke’s Bay.

We’re driving from Auckland to Napier, plan departure at 9am Wed, plan to stop in Taupo for lunch, & arrive in Napier around 4pm or so.
Quite hard to figure out wind and rain with a moving source & a moving target!

Hi Mitchell, you’re right on the edge of those winds. Tokoroa is normally quite sheltered but this system has the chance of being stronger for you. The more eastern tracking may see peak winds reduced a bit though.
All the best!
– WW

Sweet. Got some wood in and am about to tie things down

Brilliant forecasting once again all you folk at WW. Well done.

I’ve noticed the ICN modelling shows the storm coming in further west than ECMWF. Presumably ICN is more accurate than ECMWF for Europe?

Hi James, there are dozens of global models (except the NZ model, as Niwa has commercialised this state asset and blocks use of it for their own financial power). We mostly stick with the two giants, ECMWF and GFS. Good to look after the event to see which is best with regards ICON out of Germany. Generally the day before the storm most modelling is all in agreement – with just 100 to 200km difference in the precise centre of the storm, and that’s what we’re seeing today. No idea who is most accurate in Europe, but in NZ the two big models of GFS and ECMWF are a bit like the All Blacks and the Wallabies. Both good, both reliable, but only one can ‘win’ most times.
Cheers
Phil D