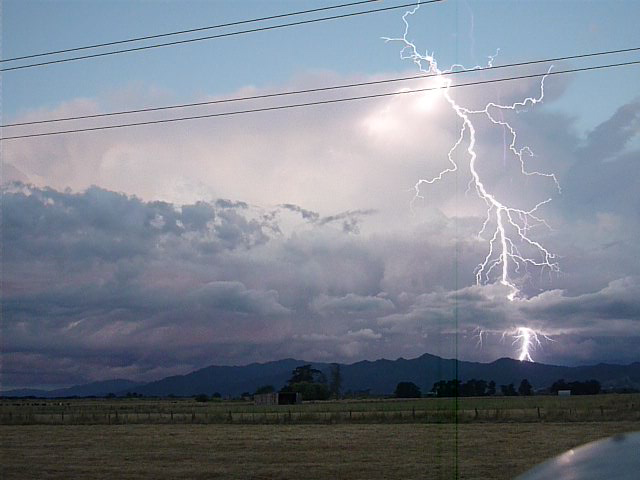 A band of torrential showers with thunderstorms is currently moving down Northland and towards Auckland this afternoon.   The thunderstorms, which were predicted earlier this week by WeatherWatch, are already affecting Northland with over 400 strikes recorded along the west coast in the past 60 minutes.

The heavy showers are expected to move into Northland, Auckland, Coromandel, Bay of Plenty, Waikato, Waitomo and Taranaki over the afternoon.  WeatherWatch.co.nz says downpours currently moving across the top half of the North Island will be heavy enough to cause flash and surface flooding and make driving extremely difficult.

Around noon there was a report that a heavy shower crossed the Southern Motorway bringing traffic to a crawl.  Showers like that are expected to increase over the next few hours across northern New Zealand.

The Weather Watch Centre predicts a high chance of thunderstorms for northern and western parts of Northland with moderate risks elsewhere.

MetService have a moderate risk for Northland and low risk for those other regions.   As off 2pm no official thunderstorm watches were in place however MetService were advising in their Thunderstorm Outlook this morning that hail, weak tornadoes and gusts to 90km/h were possible within thunderstorms over Northland today and tonight.

Throughout the morning bands of heavy rain and thunderstorms have slid down the western coastline of the North Island however so far most of the rain has remained offshore.

As the low inches closer to land those heavy showers are expected to make landfall from late today through until Monday morning.

Meanwhile conditions aren’t as bad as earlier forecast for the South Island.  It’s currently 8 degrees (as of 2pm) in most eastern areas with some showers and rain affecting coastal Otago.  Snow is expected across some parts of Central Otago throughout today affecting roads.

today was a beauty here in palmy, unfortunately i hardly saw it but i got to wear my sunglasses first time in yonks!!

really cold now [630pm] so it looks like its goin to be cool,tho i smell rain in the air – plus it wouldnt surprise me

1.36pm and rain has hit Whangarei, some quite heavy showers. Just waiting for the thunder and lightning to hit.

According to Models it is not meant to rain until tonight here in Canterbury and 7 degrees is hardly warm lol. We have seen the sun for the first time in around a week or even more maybe. Low cloud about the port hills though. Rain not meant to hit Canterbury to later this afternoon and Christchurch this evening.