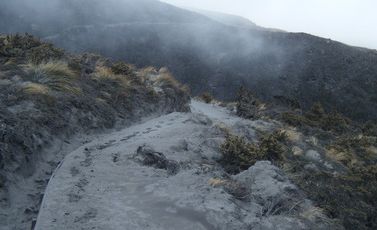 There have been no reports of further volcanic activity on Mt Tongariro overnight, as scientists try to figure out whether it is likely to blow again.

The weather this morning was clear around the mountain, which erupted shortly before midnight on Monday, spewing ash and rock high into the air.

However, it is forecast to get cloudy later today.

GNS Science volcanologist Steve Sherburn said other than a minor earthquake the mountain was quiet overnight.

Ash samples were collected by Massey University scientists yesterday, which will be analysed today to try and ascertain what sort of eruption it was.

“One of the key things the ash samples will tell us is whether it is a phreatic, steam-driven eruption, or a phreatomagmatic eruption, with magma driving it from the bottom.”

If it was the latter, it would be of more concern as there would be a greater chance of further large eruptions,” Mr Sherburn said.

“One of the key things we always want to find out in situations like this is what kind of eruption it was.

We want to be able to work out as well as we can what may happen in the future and plan accordingly.”

Results from the sample analysis would likely be ready this afternoon.

Mr Sherburn said the priority today is to observe the volcano from the air, however this will depend on the conditions.

Attempts to fly over Tongariro yesterday were hampered by low cloud, and while it is clear this morning, Mr Sherburn said the weather is forecast to deteriorate later today.

An observation flight would help scientists pinpoint exactly where the eruption came from. It is possible there are as many as three vents, Mr Sherburn said.

“One of the things we have to draw is a hazard map, so people that are working or visiting on or near the volcano can know what are the key areas that hazards may occur in.

“One of the hazards is what we call ballistics, basically big rocks. We usually define a roughly 3 kilometre radius around the crater for the typical distance these things can fly. That’s obviously a really high hazard, because if one hits you and it is more than about a pea-size, it will probably kill you.”

Mr Sherburn said what the earthquake will do next is anyone’s guess.

“This is the question that we simply do not have an answer for, particularly when volcanoes are in a period of waking up they can have an eruption and then do nothing for days and weeks and then gradually build up over time, or it could be something like the Ruapehu 2007 eruption or Raoul Island 2005 eruption which were just one shot wonders.”