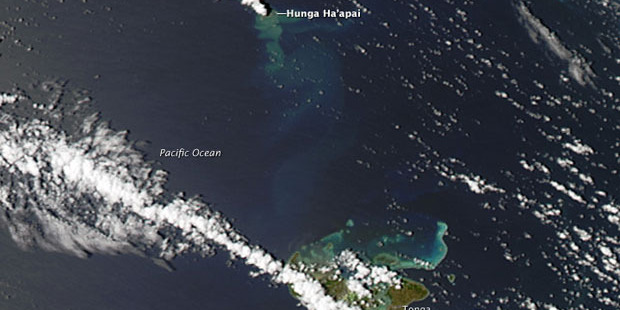 A large ash cloud from a volcano in Tonga is starting to affect flights in the region and aviation authorities have issued an alert.

Air New Zealand said the volcanic activity had caused the cancellation of some services between New Zealand and Tonga.

Flight NZ970 operating between Auckland and Nuku’alofa yesterday was diverted to Samoa and later returned to Auckland. The return leg – flight NZ973 – from Nuku’alofa to Auckland was also cancelled, the airline said in a statement.

An additional return service which was due to operate today has also been cancelled.

The airline had scheduled additional services later in the week.

“The airline apologises for the disruption and will continue to monitor the situation closely,” it said.

“The volcanic conditions in Tonga are not currently affecting Air New Zealand services to other destinations.”

Andrew Allison, who is in Tonga on holiday, said his flight had been cancelled twice due to the ash cloud.

The ash cloud as seen from the main island. Photo / Andrew Allison

The Hunga Tonga-Hunga Ha’apai underwater volcano – about 30km southeast of Falcon Island volcano – has been having small eruptions over the past few weeks, but a larger eruption in the past few days has resulted in a huge plume of ash covering the area.

An advisory has been put out by the Volcanic Ash Advisory Centre in Wellington.

Meteorological manager Peter Lechner said: “Looking at the advisory, they’ve still got an ash cloud extending from the southeast.

The volcano is about 63km north of the island kingdom’s main island and capital city: Nuku’alofa.

The advisory says it is expected the ash cloud will dissipate by about midnight (NZT) tonight.