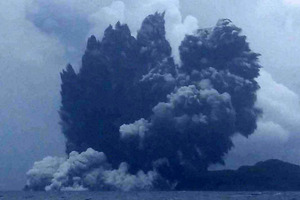 Further volcanic eruptions have disrupted more flights to and from Tonga yesterday.

In the third day of flight disruptions, Air New Zealand confirmed that a return service last night was postponed due to volcanic activity.

The eruption of the Hunga Tonga-Hunga Ha’apai underwater volcano, which is about 63km north of the kingdom’s capital city, Nuku’alofa, spewed a plume of ash 9km into the sky, disrupting air travel to and from Tonga since Tuesday.

It left hundreds of travellers and holidaymakers stranded.

Yesterday Air New Zealand ran two return services between Auckland and Tonga, the airline said. One was the carrier’s regularly scheduled service, and the second was an additional service scheduled to fly those left stranded by the ash cloud.

“A second additional service that was scheduled to depart for Tonga has been postponed due to volcanic activity,” the airline said.

Meanwhile, the deputy secretary at the Ministry of Lands and Natural Resources, Taaniela Kula, said the recent eruptions were from a new vent close to Hunga Ha’apai.

It was fairly active, erupting every five minutes with ash flying up to 500 metres, he said.

The volcanic material had formed a new island more than a square kilometre in size – bigger than Hunga Ha’apai, One News reported.