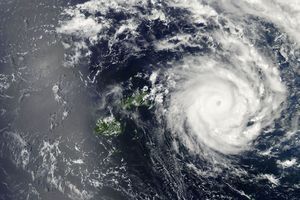 New Zealand aid agencies are poised to respond to a huge tropical cyclone that is bearing down on northern Tonga.

Tongan authorities declared a state of emergency for the island groups of Vava’u and Ha’apai today as Cyclone Ian began to lash the island groups with gales and heavy rain, news website Matangi Tonga reported.

The category four cyclone was downgraded from the highest strength, category five, earlier today, but the Tongan meteorological service is still forecasting gales of 195km/h at its centre with gusts of almost 270km/h.

It said Cyclone Ian may bring very destructive hurricane-force winds from 1pm until later today, and destructive winds to Vava’u. Tonga’s main island of Tongatapu may get damaging gale force winds until tonight.

Unicef NZ executive director Dennis McKinlay said it was ready to send supplies once the extent of the damage was known.

“We have pre-positioned supplies in Suva for emergencies, but until the cyclone has gone through and we know what the needs of the people are and what damage has been done, it’s too soon to take any action yet,” he said.

Unicef was in touch with the Tongan government and it was a matter of waiting for assessments to be done after the cyclone has gone through.

“Exactly the path of it is not quite known and it’s shifted and changed quite a bit. It’s a little bit hard at the moment.”

Oxfam NZ’s Pacific humanitarian manager Carlos Calderon said it was ready to respond and was expecting to send emergency staff to Tonga to assess the situation on the ground.

“Once the urgent needs are assessed we are expecting to help coordinate the supply of clean water and sanitation for those affected by the disaster.”

Oxfam and a partner, the Tongan National Youth Congress, have virgin coconut oil programmes in both Vava’u and Ha’apai. An appropriate response was being coordinated by both, along with the Tongan Red Cross.

New Zealand Red Cross spokeswoman Corinne Ambler said it was monitoring the situation, and an aid worker in Fiji was helping to support the Tongan Red Cross.

The worst weather was forecast to hit tonight, so a decision on a further New Zealand response would not be made until tomorrow.

New Zealand’s Ministry of Foreign Affairs and Trade (Mfat) said it was monitoring the path of Cyclone Ian closely as it passed over the islands of Tonga.

It said New Zealand government staff had been deployed to the New Zealand High Commission to provide additional support as required.

The Tongan government had not yet requested official assistance, but New Zealand was in close contact with Tongan emergency management authorities and ready to assist if requested.

Mfat said there were 114 New Zealanders registered with the ministry as being in Tonga.

“New Zealanders in Tonga are advised to register their details with the ministry on www.safetravel.govt.nz, follow the advice of the local authorities (including any evacuation orders), seek suitable shelter, monitor local media for updates, and keep friends and family in New Zealand informed of their wellbeing.”

The satellite image shows a double eye. Is this correct or some error in the data processing?

Which satellite image are you looking at?