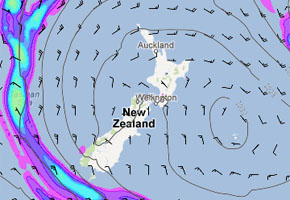 Sunny weather across most of the North Island again tomorrow with light winds, perhaps some morning cloud on western coastlines but it should brighten up in the afternoon and there is the chance of some fog in the Waikato towards dawn. Morning frosts are again possible in the Central North Island but won’t be heavy. A little cloud looks like developing about the east coast north of Auckland in the afternoon as winds tend easterly. High’s tomorrow once again around the mid teen mark, a little cooler inland.

Sunny on the east coast of the South Island tomorrow, perhaps some high cloud. Nelson will experience sunny weather and light winds. Dry in Southland with west to northwest breezes, a little cloud at times. Cloudy south of Hokitika with drizzle patches in Fiordland, north of Hokitika there will be sunny breaks and light westerly breezes. High’s around the mid teens for most although a bit cool in Central Otago and along the West Coast.

Now for a hunch I’m wondering if winds could turn to the southwest late afternoon or early evening for Canterbury making temperatures a bit cooler? No doubt it’ll be starting to cool down by late afternoon anyway. It may well reach the mid teens before hand but the pressure gradient is developing quite an arc later tomorrow almost akin to an area of low pressure on the east coast.

That happened the other day when Christchurch hit 22.3 degrees in the afternoon, a cool south to southwesterly then came through in the afternoon. I don’t think if it happens it’ll be as bad this time but the wind may tilt to the southwest. Let’s see what happens.