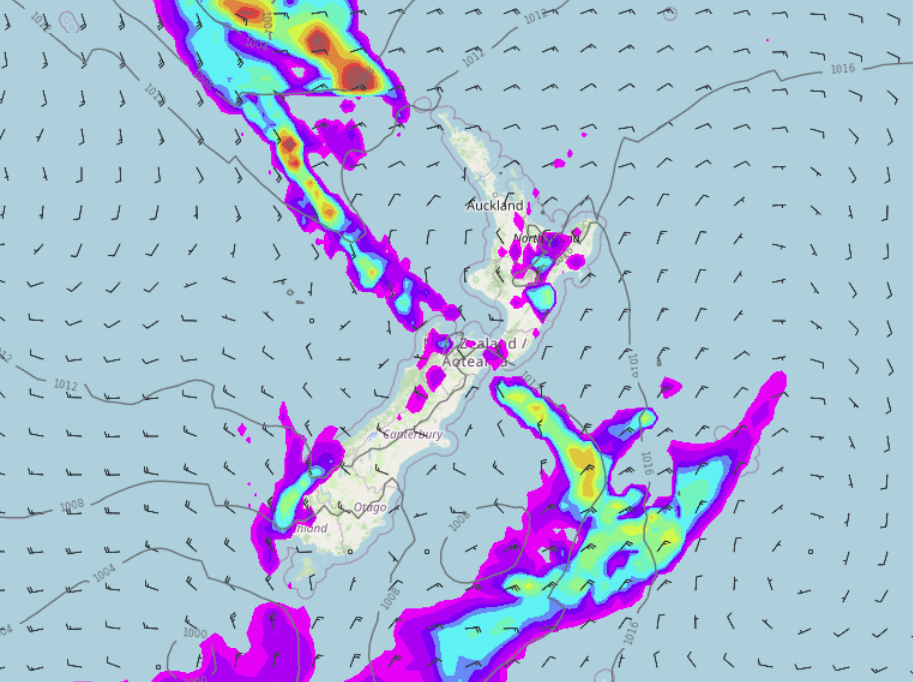 A front running parallel to New Zealand passes over this morning out to the east and with it goes some rain. Meanwhile another front lying across the upper South Island weakens with rain easing and eventually clearing.

Northland, Auckland, Waikato & Bay Of Plenty
Northland and perhaps Auckland sees sunny spells, elsewhere is a bit cloudier especially Bay Of Plenty with the odd drizzle patch or shower and northeasterly winds. Some sun may break through, more likely the further west you are into the afternoon like the Waikato. Hot and humid with northeasterly winds. Overnight some rain moves into Northland from the northwest.
Highs: 26-29

Eastern North Island
Any morning cloud breaks then mostly sunny and hot, a few morning showers clear Wairarapa. Chance of an isolated shower in the afternoon south of Napier. Northeasterly winds along the coast, warmer northwesterlies inland and especially for Wairarapa.
Highs: 28-30

Marlborough & Nelson
Rain eases to spits and showers in the morning, not clearing till late afternoon or evening. A chance of some late sun for Marlborough. North to northwesterly winds.
Highs: 23-26

Canterbury
Morning rain clears then sun increases in the afternoon, there may be some high cloud though. Light winds.
Highs: 23-30

West Coast
Heavy rain first thing for North Westland and Buller before easing, showers clear away in the afternoon then maybe some sun will break through. Further south showers mostly clear in the morning then sun breaks through, showers continue for most of the day about Fiordland. Westerly quarter winds.
Highs: 22-24