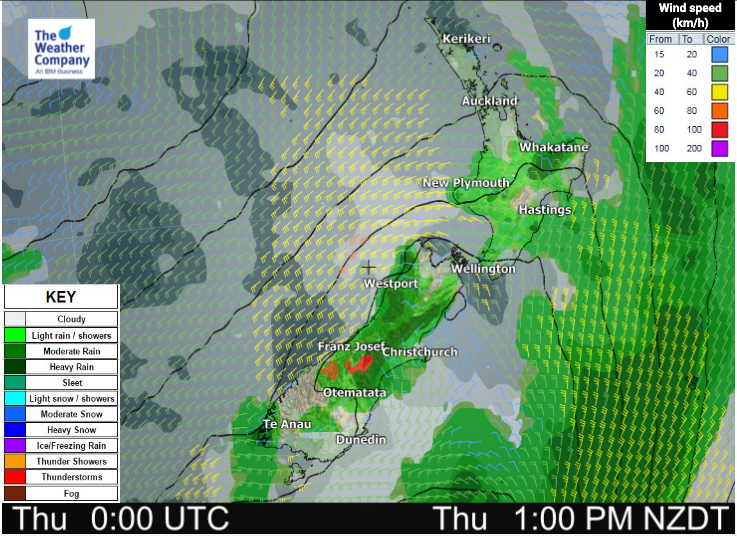 Cloudy or rainy weather will continue due to a series of low pressure systems and fronts for the next five days across New Zealand.

Most impacted will be the southern half of the South Island.

Minimum temperatures will be suddenly quite lower than normal mainly in the South Island from Thursday night. Check your local forecasts for more details.

Here are the regional forecasts for Thursday…

Northland, Auckland, Waikato & Bay Of Plenty
Showers or perhaps some morning rain, starting to thin out from afternoon as breezy westerlies tend southwest. Some sun breaks through at times from afternoon especially about Bay Of Plenty where conditions become mainly dry. Becoming dry in the evening for everywhere else.
Highs: 21-25

Western North Island (including Central North Island)
Morning rain eases to showers with northerlies changing northwest, some sun may break through at times from afternoon. Winds tend gusty southwest in the afternoon for Taranaki. Remaining showers clear in the evening.
Highs: 18-21

Eastern North Island
Thick high cloud, some scattered rain then clearing up during the afternoon as northerlies change to the west. Sun breaks through once rain clears.
Highs: 26-28

Marlborough & Nelson
Early rain then expect the odd shower and sunny spells, remaining showers clear in the evening. Winds from the north then easing in the afternoon and perhaps tending onshore.
Highs: 22-24

Canterbury
Occasional showers, starting to thin out from afternoon as southwesterlies tend easterly or northeast. There could even be a sunny spell break through. In the evening showers pick up about South Canterbury with the chance of a heavy fall.
Highs: 19-21

West Coast
Rain first thing then easing to showers, northerlies change around to the southwest in the afternoon. A chance of some sun late in the day before dusk. Only a few straggling showers remain by evening.
Highs: 18-21