Home > News > Thursday a bit cloudy with showers about...

Thursday a bit cloudy with showers about for many 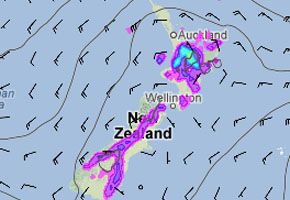 Tomorrow will see a front move over the North Island while a couple of dags or showers if you will hanging out the back will affect the South Island.

To be a bit more specific the North Island is going to be mostly cloudy tomorrow in the west, the odd shower develops in the morning then in the afternoon winds change west to southwest. Expect showers to clear by evening. There is nothing resoundingly potent about this front, no heavy rain likely or strong winds. But just a fairly average day, good movie going weather if you can spare the time but for most the working week will grind on and give us all something to do.

Out east to start from Wairarapa to Gisborne the weather is likely to be sunny with some high cloud however. Wairarapa will start to cloud up in the afternoon though with the odd shower as the low associated with this front crosses over the North Island. Late afternoon and evening showers gradually move into Hawkes Bay and Gisborne as a southerly flow develops there.

In the South Island expect cloudy areas to develop in the morning for most in the south and east, there may be a few sunny areas to start also in some places. For the afternoon the odd shower is likely to get going in many places but expect plenty of dry periods to. There is a chance in inland areas of south Canterbury and Otago that one or two of those showers may become heavy.

For northern and western parts of the South Island expect sunny areas with some cloud, isolated showers will likely develop about hills and ranges later during the afternoon however then clearing at night.