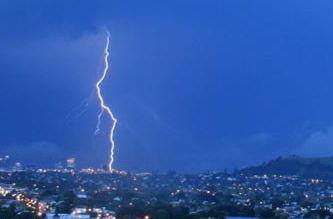 Thunderstorms have today rumbled down the west coast of northern New Zealand according to WeatherWatch.co.nz readers on our Facebook page.

New Zealand’s only free and live Lightning Tracker has detected around 1500 strikes in the past hour, mostly around Waikato, and west of Auckland out at sea.   This rate is almost half what it was two hours ago.

The total number of lightning flashes detected today around northern New Zealand and over the Tasman Sea is around 25,000 – an extremely high number.

WeatherWatch.co.nz says a low just west of Northland and Auckland is responsible for the thunder activity, as it pulls down humid air from the sub-tropics.

It’s estimated that as much as 95% of the thunder activity has been offshore.

WeatherWatch.co.nz says lightning will be most visible tonight along the western coastline of the North Island and while a few thunderstorms may affect Auckland conditions are expected to improve after sunset.

In saying that, the public are advised to be vigilant about possible thunderstorms and torrential showers and potentially damaging winds in isolated squalls.

We have lightning here just out of New Plymouth [towards Mt Taranaki], but it is not showing on the Lightning Tracker can anyone tell me why? Cheers

Had a good half hour of it here near Pirongia (west of Hamilton) around 10 this morning but not a drop of rain or any sign of thunder activity since.

Don’t get me wrong, I love the free lightning tracker and I’ve been keeping an eye on it all day, but has there really been that many lightning strikes over the Waitakere’s? I just find it hard to believe when the main rain band looks to be a couple of hundred k’s to the west, plus none of WW’s avid followers have reported thunder in west Auckland!

That reference was due to a couple of reports of thunder heard earlier today.  As you say, the thunderstorms have almost entirely been offshore and not actually over the Waitakeres.

We’re watching it very closely and will see if it gets any closer this evening.

The lightning tracker looks very impressive!!!!! I don’t think i have ever seen it look that ‘busy’.

…  Heavy rain here in Taupo, and started to hear rumbling thunder around 1.00pm ….