This is the low that never ends 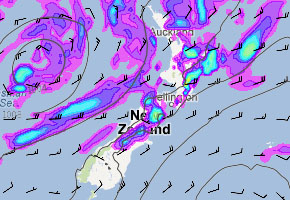 This sure feels like the low that never ends…and it goes on and on my friend. Well it may seem that way but unlike the song this low will eventually move off, although it will be a slow process indeed. This coming weekend it will evolve in a way into other areas of low pressure about the country and low pressure will continue to be about at least at this stage for another week going by long range weather models.

Next Thursday there may be some respite in the form of a ridge. There is no clear guidance suggesting any large anticyclones will move over New Zealand in long range data, the second half of August as noted by Philip Duncan could provided a more normal pattern with westerly influenced weather.

Of course due to the nature of New Zealand there will most of the time always be sheltered spots with mountain ranges and the like blocking wet weather depending on which way the wind blows, so the continuous areas of low pressure doesn’t always mean wet or cloudy weather for some while they are hanging about. The West Coast of the South Island has been a great example of this recently.

The end of the working week tomorrow and it is still looking quite wet, especially about the east coast of the North Island with rain, also from Northland through to the Bay of Plenty with showers at times. In the South Island Marlborough and North Canterbury are in for rain, drizzle patches elsewhere in the east through to the Otago coastline. The West Coast of the South Island may slowly start to lose it’s grip on the great weather they have been having as the day wears on.