Home > News > The flight on every aviation fan’s... 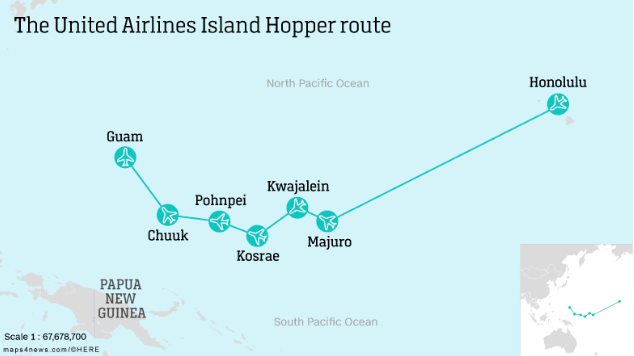 Aviation geeks call it “the holy grail of flight routes.”
For contractors it’s one of the world’s most picturesque commutes, while for islanders across the region it’s a lifeline.
Welcome aboard United Airlines 154, the Island Hopper, a Boeing 737-800 from Honolulu to Guam (and vice versa) which connects seven islands in a truly unique 16-hour flight, four times weekly.
This year marks half a century since the route was first flown. Back in 1968 Continental Micronesia was the carrier, starting a service to connect the remote communities across the vast Micronesia region of the Western Pacific.
Today, United flies direct from Guam to Honolulu, seven hours on a 777. But taking this route means missing out on some of the world’s most remote and beautiful countries and territories.
The Island Hopper has become a bucket-list must for aviation fans keen to discover the tiny airports dotted across this expanse of Pacific. They’re happy to fly the route even though most never get further than the tiny, modest airports along the way.
Most regular passengers tend to do no more than a couple of legs, but many of them have fascinating stories to tell about why they’re taking the flight, while multiple factors make this one of the world’s most unusual routes.

– First Officer Captain Fitz Fitzgerald on one of his last Island Hopper flights before retiring. / Chris Dwyer
Firstly, there are four pilots on board. Two fly from Honolulu to Majuro in the Marshall Islands, while the next two then fly the legs from Majuro to Guam.
First Officer Fitz Fitzgerald has just retired after 31 years with United. He’s been flying the Island Hopper for four and a half years, after flying 747s for much of his career.
“I jumped at the chance to live on the island (Guam),” he tells CNN Travel during one of his last flights. “I’m from Colorado, it’s a long way from the beach! I just fell in love with it.”
“I chose to work the Island Hopper almost exclusively. It’s a lot of fun, and as a pilot, it’s also challenging. This is what flying is all about, from the seat of your pants — almost. There’s no radar, no control towers and GPS gets you within about two miles of the runway, then you’ve got to find it and line yourself up.”
All the smaller islands have short runways with quick turns, while at every stop a fire truck is manned and ready by the side of the runway as they’re needed to douse the tires and cool off the brakes between stops.

– Victor Williams and Anthony Diaz who work on the Island Hopper plane. / Chris Dwyer
Although neither look old enough, Victor Williams has been working the Island Hopper for 34 years and Anthony Diaz a mere 29.
Most crew need at least a quarter century under their belt before they’re considered for the much sought-after route, as flight attendants get a two-day break in Honolulu before the return leg — a rare perk in the world of modern aviation.
Things may soon change, however, so there’s a chance that crew may no longer be able to work the entire 16-hour route. Unlike the pilots, they don’t rotate.
To say they know the route — and the passengers — is an understatement. When they started flying it, aboard a 727, there were just two flight attendants for 70 passengers over seven stops — one more than today.
As Williams explains: “There was no inflight entertainment. We were the entertainment! The back half of the cabin was 70 passengers, the front half was cargo so there could be anything from pigs to chickens to vegetables. We’ve watched people grow up. We’re the only one to have this type of routing in the whole airline industry. It’s definitely a family.”
For the sectors from Majuro to Guam, United also has a Field Technical Representative on board — a specially trained mechanic — along with a number of spare parts in the event that a technical fix is needed while on the islands.
A plane with 160 people getting stranded overnight on tiny Kosrae is not an option.
There are also complicated computations of both people and cargo at each stop, with both needing to be precisely loaded to maintain weight balance.

– The flight leaving Hawaii./ Chris Dwyer
By far the longest leg, this five-hour flight takes off from the Reef Runway at Honolulu’s Daniel K Inouye International Airport.
But not before dozens of cool boxes and white boxes of mail are loaded. The cool boxes are bringing food — particularly meat — for residents of the remote islands where fresh meat is scarce and expensive. The mail boxes are another indication of how the route is a lifeline.
At the gate, posing for a photo, are two airline employees. Based in California, they’re heading to tiny Pohnpei for a
few days’ vacation before then flying on to Guam. They are flight attendants who have always wanted to fly this route.
The flight takes off on Sunday morning but arrives in Majuro on Monday morning because it crosses the International Date Line, taking us forward a whole day.
For the entire flight, there’s nothing outside but 50 shades of blue…
– VIEW THE REST OF THIS STORY, SEE PHOTOS, VIA CNN HERE