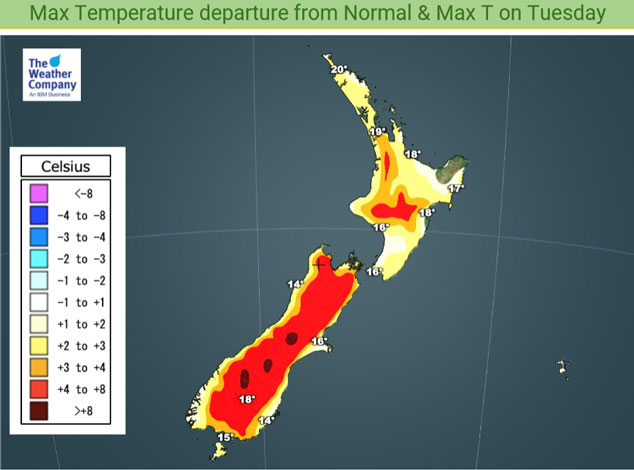 A mostly warmer than average day ahead for New Zealand on Tuesday, the North Island while warmer than average will be wet too due to a front passing over. The South Island is mostly dry but there will be a few isolated showers for the West Coast north of about Hokitika, the odd isolated shower is possible for inland Canterbury up through to Marlborough for a time in the afternoon also. The warmest temperatures will likely be about the inner South Island, eastern and northern North Island with highs reaching into the early twenties.

A cold front hits the lower South Island later in the day bringing a drop in temperatures which we’ll begin to see in the next image.

Average to cooler than average for the country on Tuesday night, a cold front starts to make its presents felt about the lower South Island as can be seen in the map below. While cool in some spots frosts should keep at bay but overnight Wednesday and into Thursday morning will be quite frosty about the lower South Island as a ridge of high pressure moves in bringing clearing skies.