Temperature trends – mildest temps in the west of both islands 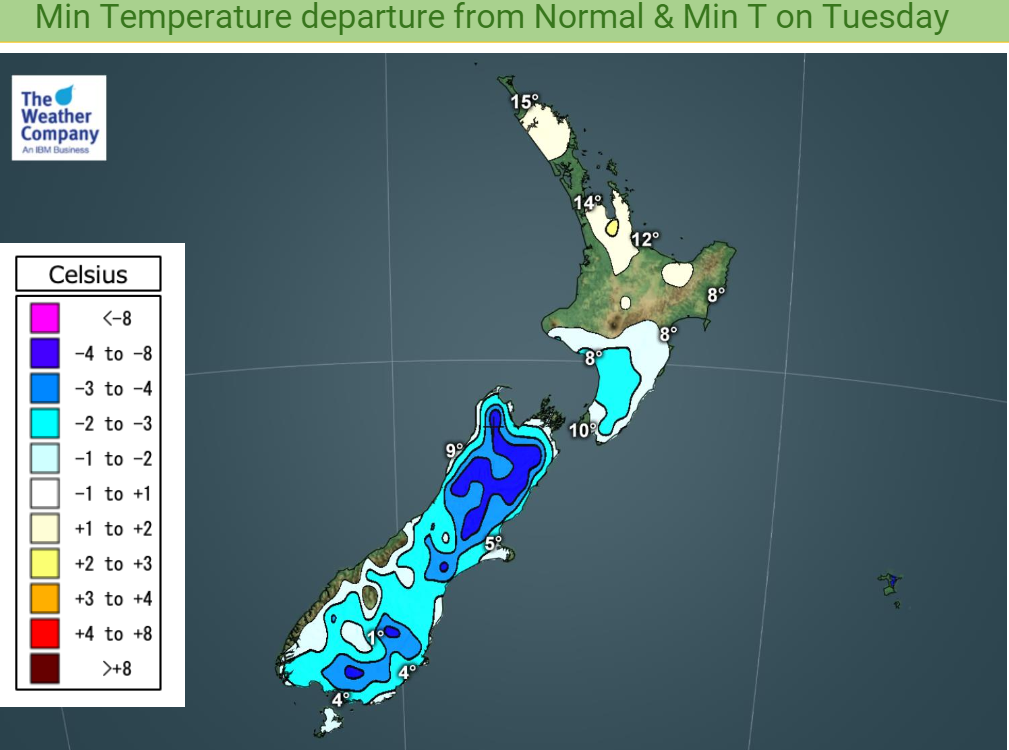 It’s been a cloudy and pretty wet day over many parts of the country and those messy skies will ensure overnight temperatures across much of the North Island and around coastal parts of the South Island remain only just a touch cooler than average for this time in May.

But there’s a couple of significant exceptions to that in places where the clouds are predicted to clear and temperatures fall accordingly.

The southwest of the North Island, from about Whanganui through to the southern Wairarapa, will have minimums 2 or 3degC chillier than normal, which means there’s a good chance of light frosts in some sheltered spots by the morning.

And right across the South Island, as soon as you get more than about 20-30km from the coast, temperatures are likely to plummet, thanks to a dying cool southerly flow.

Frosts are especially likely throughout inland Marlborough, Canterbury and Otago, where temperatures could easily dip close to 0degC.

On Tuesday, that cool south to southwesterly flow will keep temperatures about average or a tad below up the east coasts of both islands, with afternoon maxima knocking on the door of the mid-teens in parts of Hawke’s Bay but only in the low teens in coastal Canterbury and Otago.

It’s the northwest of the North Island and the West Coast of the South Island where temperatures become quite pleasant on Tuesday afternoon, with highs 3degC or 4degC, or even more, above the late May average. Auckland has 19degC in its sights and Kaitaia could well just hit the 20degC mark.