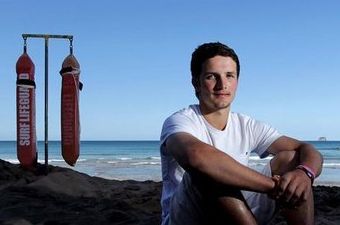 A teenager has been hailed a hero for saving six lives at a popular Coromandel beach.

But yesterday, 17-year-old Beau Hamilton was coming to terms with what could have been the worst tragedy seen at Hot Water Beach.

On Tuesday about 4.30pm, an American tourist in her early 20s was dragged out by a notorious rip near Hot Rock.

Beau was having a snack at his father’s home overlooking the beach when he noticed the woman in trouble.

“I told the old man and he said, ‘You’d better go’, so I grabbed the fins and the tubes and just went for it.”

By the time he got to the beach, the number of swimmers caught in the rip had jumped to six, after the woman’s friends and other onlookers plunged in after her.

The woman, a New Yorker, was hysterical and told Beau she thought she was going to die.

“They were really panicking. There was a lot of crying … I said, ‘You’re wasting your energy, calm down, we’ll get out of this.

We just need to swim sideways’.”

Beau led the woman and five men across the breakers towards shore for 20 minutes, only to find they were swimming into another rip. After changing direction, the group made it to water shallow enough to stand in.

“As soon as we could stand, the tears went. The woman, she was praying for me and her … I could hear her praying the whole time I was swimming them in.”

Three locals on surfboards came to his aid as they reached the shallows.

Beau said the woman had swallowed seawater but was otherwise just tired and in shock when she reached the shore.

He admitted he felt “buggered” after the adrenaline-charged experience. “I was walking back and felt my asthma kicking in.”

One of the American tourists offered him money, but he instead insisted they donate it to the surf lifesaving club.

Not surprisingly, many in the beach community have been praising him as a hero since the rescue.

Despite his assurances to the group he was a lifesaver – and having pulled other tourists from the waves over the years – Beau has never sat his surf lifesaving certificate. But Hot Water Beach Surf Lifesaving Club chairman Gary Hinds would be more than happy if Beau gave up his groundkeeping job at a local holiday camp to join up for the busy summer season.

Last summer, the club’s lifeguards did 86 rescues and 3000 preventive actions – most of them due to the same rip. No one has drowned at the beach for more than eight years.

“At the end of the day, it’s one of the top 10 destinations in the world, and they all just come here, see a flat area of water and jump straight into it,” said Mr Hinds.

“But what Beau did, you’re talking about a 17-year-old who managed to calm down six stressed.