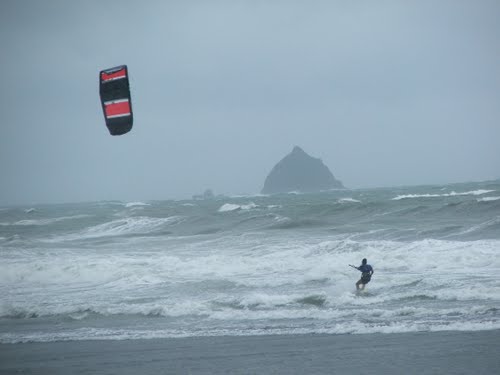 Thunderstorms have been a feature overnight and continue to remain a risk today and tomorrow as a disturbed northwest flow covers the top half of the country.

Reports of thunder and lightning came in from parts of Northland,central North Island areas and Taranaki last night with a couple of power outages occurring in mainly remote areas.

Today thunderstorms could rattle again as another cluster seems to be building to the west however at times they have a tendency to break up over parts of Auckland but they can maintain their impetus over exposed areas such as Taranaki and Northland, which effectively took place last night.

Our lightning tracker has been fairly active over the last few hours with some strikes taking place in unexpected areas such as just off Banks Peninsula earlier this morning.

Temperatures are likely to remain mild over the upper north despites boisterous weather conditions at times whereas further south it should be a tad milder than what has been witnessed lately but blue skies aren’t expected to prevail in many areas.

Timaru was the coldest part of the country with minus one degree this morning and at times the South Canterbury city has been shivering during the last 24 hours and was just one degree at 11am yesterday and the high eventually climbed to seven degrees whereas Alexandra was even colder and just managed to stay on the positive side of the ledger with two degrees yesterday.

This morning New Plymouth is already in the teens however a lively day could be instore for the Taranaki city as thundery showers could move in from time to time.

Image/ Windy and choppy conditions near New Plymouth by Panaramio

Some time on Tuesday 19th between about 4:30 and 5 p.m as I was travelling on a bus heading south from Palmerston North to Wellington I spotted in the distance what looked like a possible funnel cloud in the west, probably around the west of Manawatu or towards Wanganui I tried to photograph it but unfortunately was on the wrong side of the bus to get a decent shot. Wondering if there were any reports of such cloud and/or small tornados in the area as they were definitely forecast as a possibility. (it could have been smoke I guess but if so it was quite a big smoke column!)