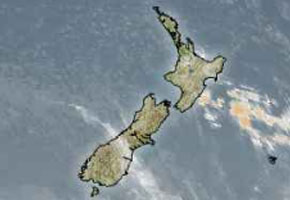 Our cold trough of air that moved over the South Island late yesterday is now moving off the North Island today, and with it goes areas of heavy showers and a few thunderstorms. There were thunderstorms in Canterbury yesterday despite it seemingly feeling like they were lacking, one developed in behind Fairly about 4.30 or 5pm, I personally saw a few strikes just south of Mount Somers around 6.30pm. At about 6pm a storm brewed up just inland from Oamaru. Then later around midnight a thunderstorm moved over Banks Peninsula with Akaroa receiving heavy rain.

Admittedly though the whole afternoon didn’t really deliver some good storms for the district but most of the ingredients were there, lower level moisture was lacking a little however and there was a fair amount of cloud cover so that did hinder development somewhat.

Today the South Island is mostly sunny with light winds although Kaikoura has a fairly keen southeasterly at the moment keeping temperatures down there. Some cloud is also scooting up the east coast due to a weak warm front. A few heavy showers are easing across the North Island this afternoon although the odd one will remain then clear this evening or tonight.

Tomorrow through to Saturday a westerly pattern is looking likely to stick with us, on Sunday a ridge may develop bringing a spell of settled weather. Generally speaking though this means weather out east will be a bit more sheltered for both islands while out west the frequency of cloud, showers and windy days is looking to be higher during this week.