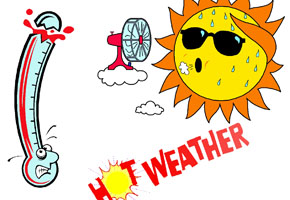 Many locations have already broken long-standing records including Camden which hit 46.1 degrees, the hottest day in more than 40 years worth of records. Richmond also hit 46 degrees making it the hottest day since records commenced 18 years ago.

Sydneysiders may find this type of heat unusual. Last summer the city only saw the mercury reach a top of 33.4 degrees and recorded just two days over 30. On average, the city typically reaches 40 degrees once every three summers, although this year has seen an unusually hot start.

Reduced cloud cover over central and western Australia during the past few weeks has allowed a very hot air mass to build. This heat has periodically made its way towards the nation’s coast due to the passage of low pressure troughs across the nation’s south.

Those braving the heat at Big Day Out in Homebush will need plenty of water. The temperature had hit 44.7 degrees at 1:30pm, while it would feel even hotter in the mosh pit.

Thankfully for most, a cool change will arrive in the city between 7:30 and 9:30 tonight. This change will be gusty and is likely to bring a rapid and noticeable drop in temperatures. Isolated showers and storms are also possible.

Looking ahead, the heat over central Australia is showing signs of dissipating due to increased monsoonal cloud. This is likely to lessen the risk of days over 40 degrees for Sydney until at least early February.

All swings and roundabouts,doesnt mean everywheres hot so averaging temperatures.ie today only 20c in auckland,it will balance out once hopefully a normal pattern prevails when sdney has 28/29c and us hopefully 25c.