Super Typhoon ‘one of the biggest storms ever observed’ 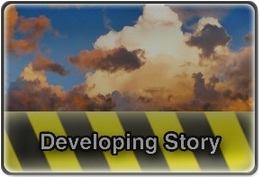 Thousands of people in vulnerable areas of the Philippines are being relocated as one of the strongest tropical cyclones ever observed spins toward the country.

With sustained winds of 315 kph (195 mph) and gusts as strong as 380 kph (235 mph), Super Typhoon Haiyan was churning across the Western Pacific toward the central Philippines.

Its wind strength makes it equivalent to an exceptionally strong Category 5 hurricane.

The storm, known as Yolanda in the Philippines, is expected to still be a super typhoon, with winds in excess of 240 kph (149 mph), when it makes landfall Friday morning in the region of Eastern Visayas.

The storm is so large in diameter that clouds from it are affecting two-thirds of the country.

Authorities in the region had moved more than 3,800 people to evacuation centers by late Thursday, Maj. Reynaldo Balido of the Philippine Office of Civil Defense said.

Most of those relocated live in Tacloban City, which sits on the coast of the island of Leyte and has a population of more than 200,000.

In a speech Thursday, President Benigno S. Aquino III warned residents of the “calamity our countrymen will face in these coming days.”

The government has three C-130 cargo aircraft ready to respond, as well as 32 planes and helicopters from the air force, the president said.

Officials have placed relief supplies in the areas that are expected to get hit, Aquino said.

As it moves across heavily populated areas of the central Philippines, Haiyan’s high winds and torrential rain are expected to affect millions of people. The storm system had a diameter of about 800 kilometers (500 miles) as of early Thursday afternoon.

The Philippine weather agency, Pagasa, warned more than 30 provinces across the country Thursday to be prepared for possible flash floods and landslides.

Some of the most vulnerable people are those living in makeshift shelters on the central Philippine island of Bohol.

Last month, a 7.1-magnitude earthquake hit the island, which lies close to the typhoon’s predicted path. The quake killed at least 222 people, injured nearly 1,000 and displaced around 350,000, according to authorities.

Another island in the storm’s likely trajectory is the popular beach resort of Boracay. Some tourists there were cutting their vacations short to get away from the possible danger.

An average of 20 typhoons hit the archipelagic nation every year, and several of those cause serious damage.

In December 2012, Typhoon Bopha wreaked widespread devastation on the southern Philippine island of Mindanao. The storm, the most powerful to hit the country that year, is estimated to have killed as many as 1,900 people.