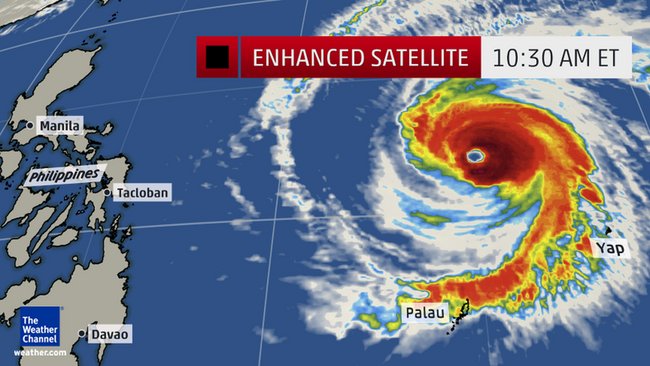 Super Typhoon Maysak is moving off to the northwest on a path that will take it near or across the northern Philippines this weekend. As of the Wednesday evening advisory issued by the National Weather Service in Guam, winds have decreased to 150 mph. Additional slow weakening is forecast in the coming days.

Early this week, Super Typhoon Maysak rapidly intensified into the equivalent of a Category 5 hurricane with maximum sustained winds of 160 mph. According to Weather Underground’s Dr. Jeff Masters, Maysak is only the third super typhoon in reliable records dating to the 1940s with estimated winds that strong prior to April.

Maysak is also only the fifth super typhoon of record prior to April 1, according to senior digital meteorologist, Nick Wiltgen. A western Pacific tropical cyclone is named a “super typhoon” when maximum sustained winds reach 150 mph. The last such pre-April super typhoon was Super Typhoon Mitag in March 2002.

Commands respect even from #space: we just flew over typhoon #Maysak. pic.twitter.com/w86GnxmaO2

Prior to becoming a super typhoon, Maysak caused significant damage and killed at least five people in the Chuuk state of Micronesia, according to The Associated Press. Maysak’s eye passed just north of Yap Island on Wednesday, local time. Winds gusted up to 48 mph at Yap International Airport.

Even though Maysak will be weaker by that point, significant impacts are still possible, including strong winds, flooding and mudslides.

Forecast path and peak sustained winds of Maysak over the next five days. Circles denote uncertainty in the position of the center at each forecast point. (Weather Underground)

Guampdn.com reported about 95 percent of tin houses were destroyed in Chuuk state. Communications were down in the islands Saturday, but were restored Sunday. Kane Faylim, airport manager for the Chuuk state government told the Associated Press airport employees had clear rocks deposited by large waves from the runway of Chuuk’s airstrip Tuesday, which has now been reopened.

Maysak became the third typhoon of 2015, a record active early start to the year in the western Pacific, according to Weather Underground’s director of meteorology, Dr. Jeff Masters.

Western Pacific Ocean tropical cyclones, called typhoons, can occur any time of the year, but typically hit a relative minimum in February and early March.

The name Maysak is Cambodian for a kind of tree.