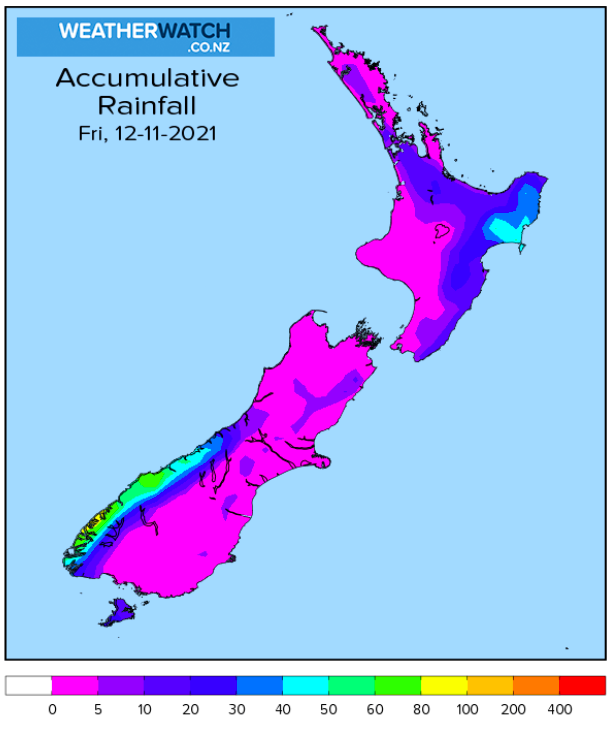 Have some of you noticed rain and thunder icons showing up but sunny weather? It’s due to the stalled low pressure system around the north eastern North Island, creating the right ingredients for rain and thunder, but the weak system means it’s marginal for them to actually form everywhere – or they don’t form until very late in the day.

Sunday sees a similar set up, with a low risk of thunder/downpours in the afternoon for the upper North Island, and lighter rain or showers down the eastern side from East Cape to about Wairarapa. Some drizzly falls may go further south. Many places will be mostly dry.

It’s going to be a warm to hot day for many – with even warmer afternoons on the way in the coming days.

To see the maps below in more detail, simply go here: https://www.weatherwatch.co.nz/maps-radars

Thunderstorm/Rain false alarms – We’re as frustrated as some of you are with the forecasts this week in the upper North Island. While many did get big downpours and thunderstorms, some more populated places did not. It’s a tricky situation sometimes to manage forecasting the risks of something developing, compared to the reality of what then happens. The data was accurate – but the way we communicate that can be improved/fine tuned.

Our latest weather video (the Friday one) actually talks about the high likelihood of forecasts over predicting thunderstorms and downpours this weekend and why this sometimes happens. It’s worth a quick watch if you’ve found the forecasts frustrating. Basically the upper North Island was in the risk zone, but not everyone in it, gets them.

The recent addition of the MetService live rain radar is a great tool which helps make our forecasts more accurate, so when rain is forecast you can now track it in real time…sometimes doing this can also show how close a major downpour may actually be to you, even if sunny overhead for much of the day!

We’re making future changes to the way we cover thunderstorm forecasts – across 2022 we’ll be adding more details, so rather than just “thunderstorms” and a thunder icon, we’ll be aiming to provide more context around where, how intense and how high that risk is and timing. Also providing more visual rain forecast data to see at a glance if the day is wet, or just a late downpour.

No forecaster on earth is perfect, but our IBM data is the most accurate on *earth (*independent global survey in August 2021) and here at WeatherWatch.co.nz we’re always working to fix and improve the areas that still sometimes let us down. That’s what has made us stand out for almost 15 years. Not just setting the standard, but raising it too.

On a side note, we’re also bringing in better real time lightning data. A physical global lightning sensor has arrived in NZ from Germany which we’ve just imported and we’re also working with IBM to include more real time lightning data in the future, direct to our mobile app (which we aim to have overhauled by the second half of 2022). All a big work in progress and the Covid lockdowns over the past year and a half have significantly slowed us down – so we thank you for your amazing support as we continue to grow and serve you with better forecasting products.

Have a great Sunday!

Hi Kay, it may not be for a while because the developing La Nina favours giving the eastern North Island lows like the one we have now. Even though it’s a weak system it’s delivering a repetitive set up. In about a week’s time we’ll be heading back into a westerly pattern so that should give you some sunnier, drier, warmer weather for a time 🙂
Cheers
WW

Thanks for that, we will hang out for a weeks time then.