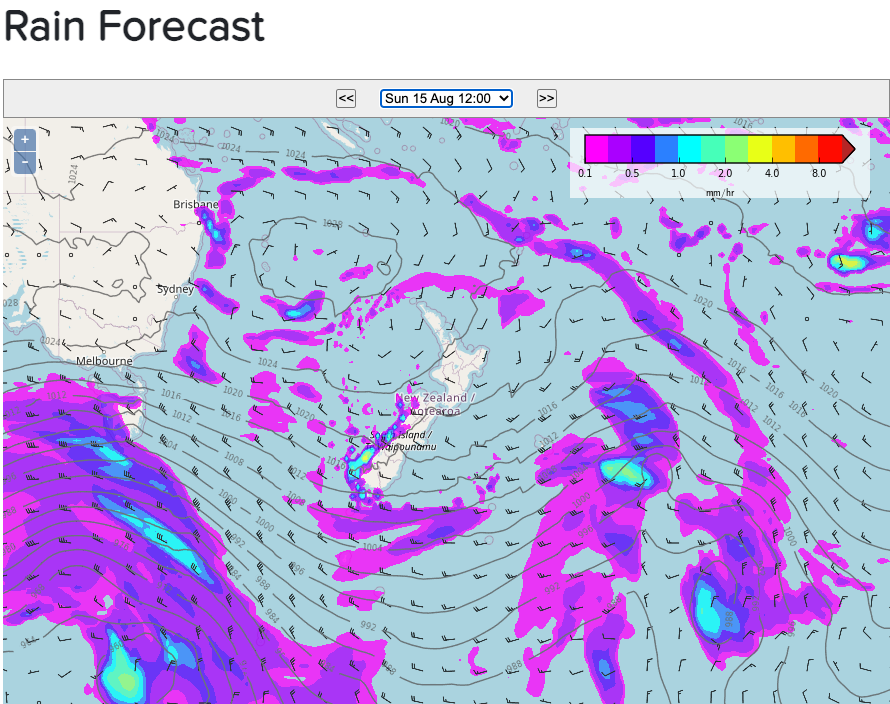 Westerly winds will gradually build today ahead of gales on Monday for some and heavy West Coast rain as a storm south of NZ tracks by for the first half of the coming week.

While normal weather for August, severe weather is expected in the coming days with heavy rain on the West Coast, heavy snow in the mountains and ranges and gales in eastern and central areas.

For today, Sunday, high pressure remains in the northern Tasman Sea helping keep conditions fairly settled in northern New Zealand. Sou’west winds in the north start to ease and turn more westerly today with only a few brief mostly light showers coming in off the Tasman Sea in the very west. Much of the North Island is otherwise dry.

Winds around Wellington and the lower North Island/upper South Island (Central NZ) will build later today and over Monday with severe gales in exposed places possible later Monday and Tuesday.

In the South Island a westerly flow is building over the next 24 hours with gales – possibly severe – developing on Monday inland and to the east. For Sunday it will be windy in some exposed areas to west to north west winds but Monday is the windier day.

Rain develops on the West Coast today with heavy falls turning to snow at higher elevations over Monday and Tuesday.

The next burst of wintry weather will be more lower South Island focused – peaking on Tuesday and Wednesday as the system partially brushes NZ but impacts our weather nationwide. Not everyone will be impacted by severe weather.

New Zealanders can expect an average to cooler than average week ahead.