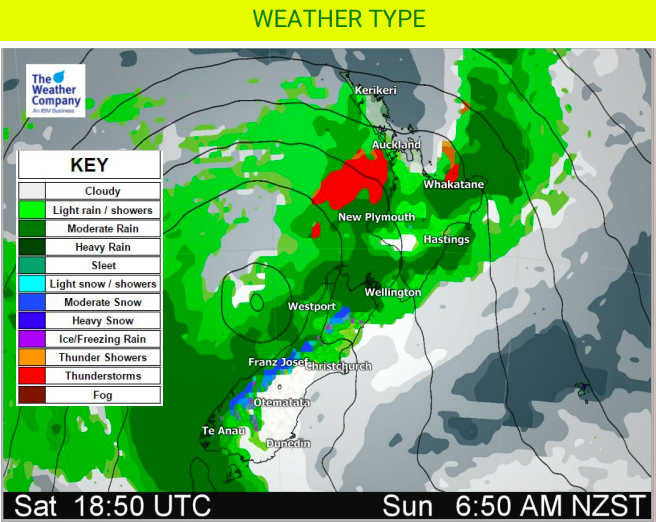 Sunday is a milder than average day for a number of regions but it is ahead of a cold change that will bring snow to the mountains and ranges today and over the next couple of days, especially in the South Island but including the Central Plateau in the North Island too.

As for the weather today, a number of regions will be wetter and windier, with a cold change arriving in the south later on. Calmest in the east of the South Island until the southerly arrives later today or tonight.

NORTH ISLAND:
Heavy morning downpours and areas of rain easing to showers and some sunny spells. Sunny spells increasing most in the east later. West to NW winds picking up and becoming blustery in some exposed areas. Warmer than average in a number of regions, especially eastern districts.
Highs: 13 to 20

SOUTH ISLAND:
Rain all day on the West Coast with heavy falls. Mainly dry in the east from Marlborough to Otago but some spillover cloud and showers/spits possible. With the low itself crossing the South Island winds will be varying, but northerly quarter winds look most likely over the Upper South Island while a cold windy S to SW change moves into the lower half of the South Island across the day and evening. Rain turns to snow in the ranges, with heavy snow flurries this evening and overnight and across Monday, potentially affecting alpine passes.
Highs: 8 to 16