Home > News > Strong winds from NZ across the Tasman c... 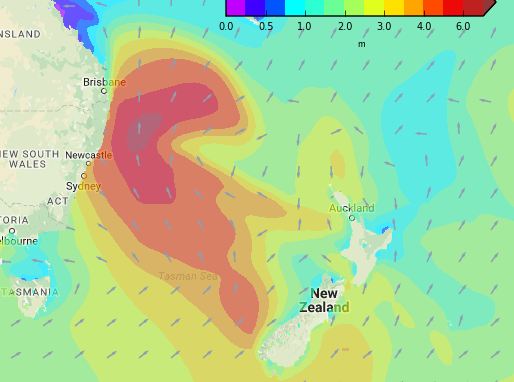 A barrage of big waves will create dangerous surf conditions along exposed coasts in New South Wales and southeast Queensland until the weekend.

Conditions will be hazardous for coastal activities such as swimming and rock fishing and this type of powerful swell event can manipulate the shape of beaches, causing flash rips. Even experienced surfers may be out of their depth at times this week.

The plague of large waves is being created by a unique synoptic pattern over the Tasman Sea.

Waves are created when wind blows across the surface of oceans, seas and large lakes. Wave size increases as these winds become stronger, persist for longer or cover a larger area of water, known as the fetch. This week, wind strength, duration and fetch are all on the higher end of the scale, so the waves will be big.

Impressively, this fetch of strong to gale force winds this week extends across the entire Tasman Sea, from New Zealand to eastern Australia.

It is worth noting that this week’s swell is smaller and coming from a different direction to last June’s black nor-easter. These differences will prevent this week’s waves from being as damaging as that event, although some coastal erosion is still likely.

Wind over the Tasman Sea is expected to ease at the end of this week, allowing waves to become smaller along Australia’s east coast from the weekend.