STORY & VIDEO: Xmas lights over NZ- what were they? 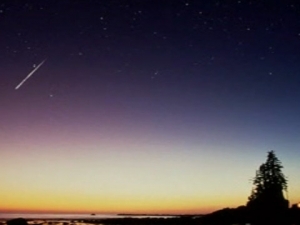 Some people were left confused and others excited as lights appeared from nowhere on Xmas night.

Sightings of a “UFO” were reported in New Plymouth and Wellington, although a witness from Waikanae believes there is an earthly explanation.

Jennie Velvin, of New Plymouth, said everyone would think she had had one too many wines when she saw a UFO.

But she was positive she had not touched the booze and that even her husband, John – normally a sceptic – could confirm there had been something strange in the sky above Ngamotu Rd, New Plymouth.

Velvin takes her dogs out the back of the house for toileting at 10pm every evening and is familiar with the night sky.

“I always look up to the sky to see what’s there. Sometimes I see a satellite, like a slow-moving star, and we get a lot of helicopters.”

But she said what she saw on this night was not normal.

Craig Henrksen saw it from his home near Wellington airport.

”I hadn’t touched a drop of alcohol either,” he wrote. ”At 0145 on 26th Dec I saw one of these ‘lights’. I thought it was a reflection of street lamps on my window but realised it was moving. I opened the door and watched this orange ball of flame move at a constant speed heading south almost as high as a plane would fly until roughly 40 secs later it was too small and far away to see. Im pretty sure it wasn’t Santa.”

The video below was posted on YouTube, showing strange lights over Paekakariki on the Kapiti Coast.

There have been reports that Chinese lanterns ( with a picture of a hanging red lantern) have been seen. The last report was near the Indian/ Chinese border. But this is not right because those lanterns could fly only if you tied them to the bottom of a plane or helicopter.
But they could be the mysterious biodegradeable flying lantern?

Hi there a few weeks ago on the night of the fight for life i commented on this exact same thing out west auckland and a few others that were with me also saw these exact same kinda lights..Moving all sorts of directions at quite a pace..to fast to be a plane or heli..they were quiet red and bright and would zoom away then come back..Very cool indeed

These weren’t lanterns cause they moved to fast side to side then would go away then come back and they were in diff parts of the city not just coming off 1 hilltop.. They moved across the sky

Slow moving and rising into the sky. Obvious really.

i found this on website this is a simple show you: http://sianolaphotography.wordpress.com/2010/08/01/chinese-lanterns

We live in Havelock North and also saw the lights, they where not lanterns!. They descended then went left then right at high speeds for about 3 mins. I am sure the candle would have burnt out at the speed they where travelling….