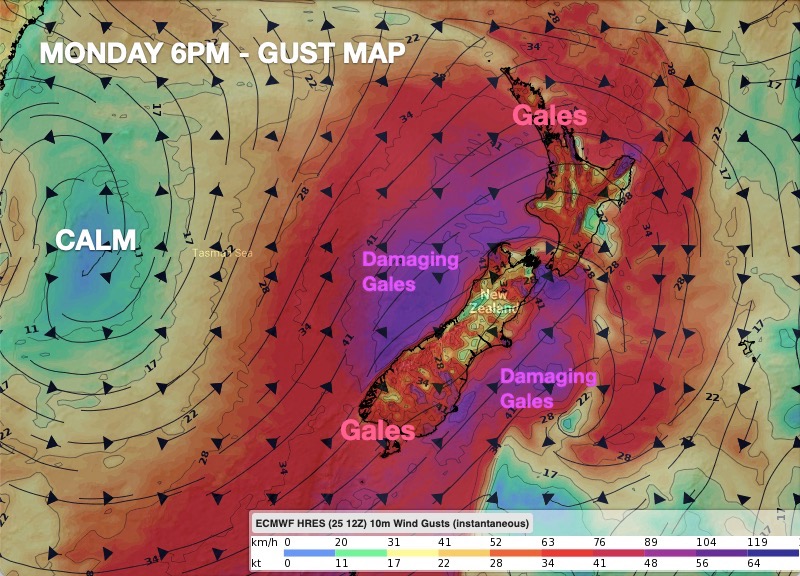 Monday, the last day of spring on the meteorological calendar, looks to go out in spring-style with a South Island low likely prompting more severe weather warnings.

WeatherWatch.co.nz head forecaster Philip Duncan says the late spring pattern is part of a stormier Southern Ocean weather pattern this year, which is seeing sizeable lows over or near NZ and more windy westerlies across the country. This Southern Ocean set up is currently challenging the La Nina influence which usually brings more easterlies to NZ.

New Zealand’s location, with more than half the nation in the Roaring Forties belt of windy westerlies, means we are often exposed to unsettled weather like this, although the Southern Ocean’s weather pattern is more unsettled this year.

While this coming Monday sees another low in the same place, it’s a much larger system which doesn’t always ramp up peak winds further – but does mean windy weather covers a larger area. Duncan says “the energy is spread further afield, this can sometimes reduce the peak gusts but can mean more regions have possible wind warnings”.

Windy weather will build over the weekend ahead of Monday’s winds, with gales also likely this weekend (especially in exposed areas/marine areas), but severe winds look more likely on Monday, although they may possibly form on Sunday from Cook Strait northwards.

Refer to your hourly WeatherWatch.co.nz forecasts for more details – or www.RuralWeather.co.nz. Keep up to date with tax funded weather warnings from MetService – which you can find here: www.weatherwatch.co.nz/maps-radars/warnings/metservice

THE MAPS:
The shaded areas in purple, which are mainly marine/coastal, are the areas with the highest chance of producing damaging wind gusts. NZ’s mountains and terrain then make these winds locally stronger – or weaker – depending on where you live. Areas in red show gusts into gale force which can be damaging but usually this area has far fewer serious issues.

The winds will get worse to the east of the South Island (at sea) on Tuesday at the low deepens further moving away from NZ.

Once again this is an evolving situation, WeatherWatch.co.nz will have more details in the days ahead.