Spring continues – the season lives on 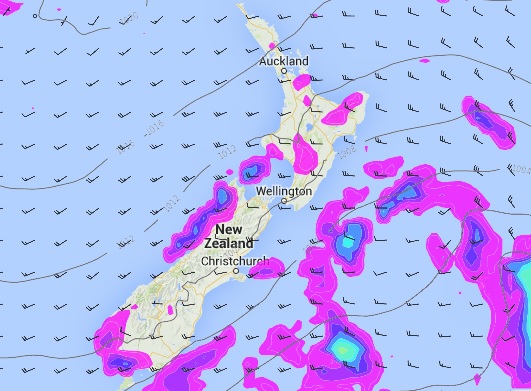 Yes spring is still in full force at the moment and doesnâ€™t want to let up at least for the next week or two, there will be a few calm days here and there but the majority of the coming weather includes fronts, rain / showers and windy days.

On Monday we start with a low pressure system which moves over the North Island, this brings rain to the upper half of the island and patchy falls further south. Rain could be heavy around the Auckland and Northland regions then easing in the afternoon as northeasterlies change northwest. The South Island is mainly dry although a few showers catch the Nelson and Marlborough Sounds area, also Fiordland and Southland later in the day.

Another day another front for Wednesday, rain or showers moves northwards along the west of the country during the day with the heaviest falls being along the West Coast of the South Island. Mainly dry in the east although a southwest change works up the South Islands east coast afternoon / evening bringing showers, possibly heavy with thunderstorms and hail which has become a somewhat weekly feature about Canterbury over the past 3 or so weeks.

Thursday is a day to blow out the cobwebs so to speak, a high north of New Zealand in the Tasman Sea has a ridge that moves closer to the country during the day from the west. Clearing showers and easing winds are on order. Friday sees the best weather for most but another northwesterly airflow builds ahead of a front in the south Tasman Sea.

The westerly rain hasn’t arrived this year and we are pretty dry on the Kapiti Coast. Has been all fronts, fronts and more fronts. Upper troughs needed please as they normally deluge us.