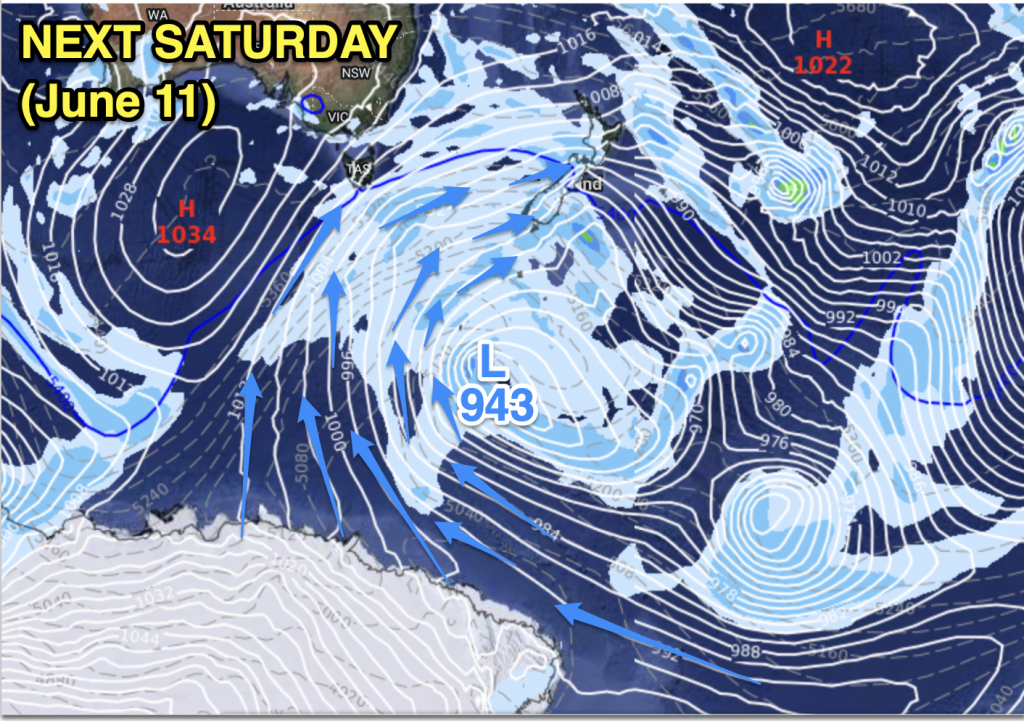 Updated 10:42am Monday — The first proper winter blast of 2022 may be on the way for New Zealand, following weeks of milder than usual weather.

A storm is forecast to develop this week in the Southern Ocean and by this coming weekend the set up may allow an Antarctic southerly to bring the first sea level, or low level, snow event of the year to NZ – mostly in the lower South Island. Cold polar air will reach north of NZ – it’s the biggest cold event of the year so far.

Forecasts at WeatherWatch.co.nz now have snow icons appearing in some places like higher suburbs in Dunedin, and lower down in Invercargill, Gore and Queenstown for next Saturday (June 11). Snow totals, however, may be low – but the risk is there. Fiordland and Milford Sound also have the chance of snow – possibly heavy.

“It’s too early to lock this in but the data and reliable models are certainly aligning more to bring a wintry outbreak to the country at the end of this week or this coming weekend” says WeatherWatch.co.nz head forecaster Philip Duncan.

We will have more details on Tuesday about which areas will be most impacted – and also trying to confirm if snow will fall at sea level and how much. Southland looks most exposed, as does Fiordland.

In recent days Tasmania, Victoria and NSW have all had snow events on the mountains and ranges with snow levels as low as 300m. NZ has the chance of snow to sea level in Southland and Otago and to low levels in some parts of Canterbury, based on data today. Airflows in Canterbury and northwards may have more of a westerly lean to them, which can keep these regions slightly milder and drier – but this isn’t yet confirmed and the modelling could still change enough.

WeatherWatch.co.nz says the best chance for Antarctic blasts in New Zealand is when a powerful high lies over Tasmania shaped north-to-south, while a deep low lies south to south east of Dunedin…the two then work together to dredge up Antarctic southerlies. The high over Tasmania this weekend may lose it’s north to south shape, encouraging more of a south west lean to the air flow and less southerly (this can protect the Canterbury plains more, but exposes Southland and Fiordland to the coldest air).