Southern Hemisphere wraps up a record-quiet year for tropical cyclones 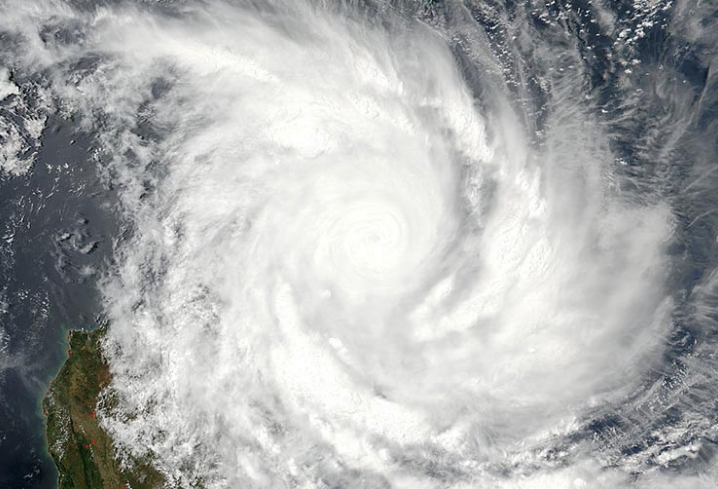 June 30th marked the end of a record-calm year for tropical cyclone activity in the Southern Hemisphere. A cyclone â€œyearâ€ extends from July 1 to June 30 south of the equator (this is because cyclones peak in the warm season, which straddles adjacent calendar years in the Southern Hemisphere). For the 2016-17 year, this entire half of the world racked up just 45% of the accumulated cyclone energy(ACE) that it sees in a typical year, based on the climatological period 1981-2010. ACE incorporates a tropical cycloneâ€™s lifespan as well as its peak winds.

â€œIt’s pretty remarkable that an entire hemisphere can have less than half of their normal ACE in a season,â€ noted Phil Klotzbach (Colorado State University) in an email. The previous record-low Southern Hemisphere ACE for a July-to-June year was 54% of average, in 2008-09.

The large-scale rising motion needed for sustained tropical cyclone action was often in the wrong place during the southern summer of 2016-17. The strongest areas of rising motion across the southern tropics and subtropics were located over land, across southern Africa and western Australia. Meanwhile, downward motion predominated at these latitudes across the South Indian and Southwest Pacific Oceans, where most of the Southern Hemisphereâ€™s tropical cyclones develop. â€œA good way to kill a tropical cyclone season is to have upward motion over land!â€ noted Klotzbach.

Below are the Southern Hemisphere stats for 2016-17, together with the numbers recorded in a typical year. The data comes from Klotzbachâ€™s real-time roundup page for global tropical cyclone activity.

Tranquil north and southâ€”except for the Atlantic

The only one of the six basins tracked by Klotzbach thatâ€™s been having a busier-than-average season is the North Atlantic. Here, ACE is running at a peppy 215% of average. But weâ€™re talking tiny numbers: The North Atlantic has seen a grand total of 2.8 units of ACE, compared to an average to date of 1.3. Although there have already been three named storms in the North Atlantic, none of them became hurricanes. For that matter, there has yet to be a single typhoon (a hurricane-strength cyclone) in the Northwest Pacific, whereas a typical year has already seen 8 â€œtyphoon daysâ€ by this point.

For the climatological period 1981-2010, here is the average annual global ACE for each basin, as calculated from Klotzbachâ€™s datasets. The Southern Hemisphere statistics apply to the July-to-June span preceding each calendar year.

On average, the planet produces about 75-100 named storms and about 40-60 hurricane-strength cyclones per year. Those ranges are more durable than you might expect, in part because of the â€œbalancingâ€ effects of the El NiÃ±o-Southern Oscillation (ENSO). A strong El NiÃ±o event will tend to favor hurricanes in the Central and Northeast Pacific while inhibiting them in the Atlantic; the opposite is true for a strong La NiÃ±a event.

ENSO has little year-to-year effect on the total number of named storms in the Northwest Pacificâ€”but it does have an influence on ACE in this key region. El NiÃ±o years tend to produce stronger, longer-lived typhoons, which in turn helps boost global ACE for those years. Since 1970, some years have seen less than 500 units of global ACE, while others have seen more than 1000 units. (These annual ACE statistics, compiled by Ryan Maue of WeatherBell, combine each July-to-June SH year with the following January-to-December NH year.)

Global ACE peaked at near-record levels in 2015, in sync with the record-strong 2014-16 El NiÃ±o event. At the same time, the amount of heat held in the planetâ€™s oceans dipped in 2015. This was a departure from the oceanic heat accumulation thatâ€™s predominated since 1970, as human-produced greenhouse gases trap more and more heat. Itâ€™s also a sign that large amounts of heat and moisture escaped the oceans in 2015, some of it helping to fuel that yearâ€™s crop of intense tropical cyclones. â€œIt is not unexpected that there is a quiet period subsequently, as a recovery and recharge of ocean heat content takes place,â€ said global water and energy cycle expert Kevin Trenberth (National Center for Atmospheric Research) in an email.

How the heat and moisture get transported

On a yearly average, the tropics accumulate far more heat than the poles, and tropical cyclones are one of the mechanisms of heat transfer from lower to higher latitudes. But there are other ways this energy can get transferred, Trenberth pointed out. An active midlatitude jet stream can pull enormous amounts of tropical heat and moisture poleward, often in the form of atmospheric rivers. The U.S. West Coast was hammered by soggy storms in the past winter, leading to California rainfall that averaged 124% to 178% of normal by region for the water year ending June 30, as summarized by Jan Null (Golden Gate Weather Services).

Heat and moisture can also escape tropical oceans via monsoonal lows, which donâ€™t qualify as tropical cyclones but which can still spread extreme, prolonged rains into subtropical regions.  When such lows move over Australia, they are sometimes dubbed â€œlandphoons,â€ and they were unusually prevalent in 2016-17, closing Uluá¹Ÿu-Kata Tjuá¹¯a National Park on Christmas Day and giving the Northern Territory 148% of its average wet-season rainfall. Extreme rainfall also inundated parts of Southern Africa in January and large sections of Southeast Asia, including Thailand and the Philippines, in January and February. Such events remind us that while ACE is a valuable tool for assessing tropical cyclones, there is much more to the grand cycles that shuttle heat and water around our planet.

For those in the U.S. who are starting a long holiday weekend, Happy Fourth! We’ll be back with a new post on Monday 7/3.