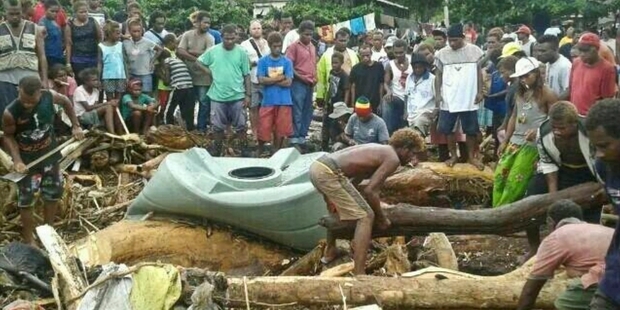 He fears disease and civil disorder after last week’s floods, which killed at least 21 people.

There was now a risk of malaria, diarrhoea and pneumonia, he said.

Most of the 14 centres were schools which were not equipped to deal with large numbers.

Many had not paid their water rates and did not have supplies of water.

“I just went to a centre in the morning which has almost 2500 people and they have only two toilets for men and two toilets for females and none were working,” he told the Herald last night.

Many people did not have proper shelter because the centres were not meant for so many people.

“They are just lying under the trees.”

People were in shock, especially if they had lost all their belongings and seen people swept away.

If food and water ran short, they would simply go and find it.

“If they know there is food stocked in a warehouse they will try to loot. These are scenarios we are facing … That’s why we are trying to cater to them in the place they are now.”

Mr Burgess, a Unicef water, sanitation and hygiene specialist, has been living in the Solomons capital, Honiara, for a year.

He has been away from his homeland, India, for nearly 10 years doing humanitarian work in Haiti, Liberia, Sudan and Yemen.

Sixteen emergency response personnel from New Zealand with relief equipment will leave for Honiara this morning on a RNZAF Hercules.

The Australian Air Force was due to send a Hercules last night.

Foreign Minister Murray McCully said New Zealand was in close touch with Australia about the response.

He said New Zealand was standing by for any requests for further assistance.

“My sense is we are still going to be receiving new information for a day or two.

“This is a situation where there are some quite immediate needs, and I think between New Zealand and Australia we can meet any challenges that are required in the next few days.”

The newest bridge across the Mataniko River had re-opened to light traffic, but flights could be restricted because trucks carrying aviation fuel to the airport could not use it.

Seventeen New Zealand police officers are already in the Solomons, the remnant of the Regional Assistance Mission established in 2003 in response to civil disorder.

Most of the $300,000 initial funding will go to Oxfam and World Vision on the ground in the islands with $25,000 for the New Zealand High Commission to make discretionary payments.