So, when’s the next cyclone? 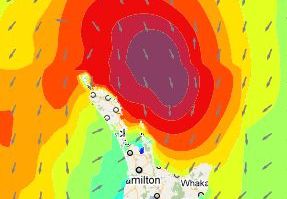 “It’s highly likely we haven’t seen the end of the tropical storms and this years cyclone season may last longer than April” – WeatherWatch.co.nz

Many are asking when the next cyclone will appear – and the good news for those affected by the recent storms in the South West Pacific is that the next 7 to 10 days look like they will be tropical storm free.

“We first saw this low developing earlier last week on these models and we felt confident that it was accurate based on other data and our knowledge of these systems.  That’s why we made public our prediction about this cyclone on Thursday last week” says head weather analyst Philip Duncan.

WeatherWatch.co.nz says the latest global models, such as ECMWF (European) and GFS (American) now both agree that the next 3 to 7 days look far more settled than they’ve been in several weeks.

“Some forecasters don’t like to rely on models, others find one or two and stick with them.  So far this summer we’ve found these two global models to be very accurate at pinpointing developing lows, their severity and their eventual track”.

Mr Duncan says only two lows are in the long term forecast (next seven days).  One, a small one north of New Zealand on Monday may bring in some rain on Tuesday and Wednesday to northern New Zealand and the other, a slightly larger low west of Australia at the end of next week.

“While the models have been reliable lately it doesn’t mean they always get it right.   For example we’re monitoring that small low next week north of New Zealand, which the models say will be fairly small, but it might deepen further and bring heavier rain.  The models only help you so far, the rest is up to the forecasters and other data at hand closer to the time”.

The Bureau of Meteorology in Australia and the Fiji Meteorological Service also say the chance of another tropical storm forming in the next 3 days is “very low”.

WeatherWatch.co.nz believes the weather will be mostly dry across Australia and New Zealand over the next week – a significant change from January’s weather and the start of February.

During Friday Yasi’s remnants will head over the Australian desert dropping heavy rain.

As to how long this calm spell will last?  Well, we are in the middle of a very strong La Nina event and at the peak of the cyclone season.  The two combined means it’s highly likely we haven’t seen the end of the tropical storms and this years cyclone season may last longer than April.

Cyclones will continue through February and March and stop in April. Look for their devlopment around new and full moons. It was new moon on Thursday.