Snow on track for high country 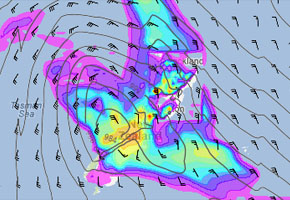 This system is still on track to develop heavy snow to the high country in the South Island tomorrow. It must be reinforced that mainly this snow event will be at higher altitudes, people living in the main centres will not notice any snow. Heavy rain is likely for Christchurch tomorrow however and places like Little River and lower lying areas about the Heathcote River may get some flooding.

The snow risk area is for inland areas and extends from North Otago through to Southern Marlborough tomorrow. Snow falls do look a bit more forgiving in latest data not because the amounts of precipitation have changed but the freezing levels are not lowering as fast now. Snow is now likely to start falling a bit higher at first in the morning then gradually lowering during the day. Falls in North Otago and Canterbury are expected to 800m at first in the morning lowering during the day to 400m by evening then clearing at night.

Southern parts of Marlborough are still inline for snow, to 1000m after midday then lowering to 500m in the evening and clearing later at night.

High up on the Ski fields like Mount Hutt there is likely to be large amounts of snow tomorrow, the season there has been extended to the 14th October but this could even make it a little bit longer.

Places like Porters and Arthurs Pass are likely to be closed from tomorrow afternoon or evening due to snow fall so make travel plans accordingly.