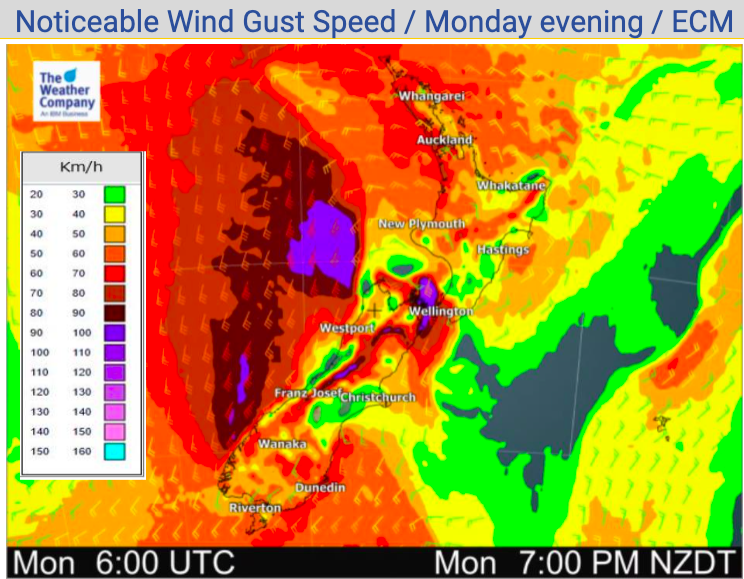 Just when you thought it was summer – spring reminds you ‘hey I’m still here’. New Zealand’s location on earth means we can sometimes go into December with summer weather already here, other years it can feel more like October for the first half of December.

December 1 marks the meteorological start to summer but the astronomical start isn’t until December 21 this year.

A stormier Southern Ocean plus warmer sea surface temperatures around New Zealand and the Tasman Sea are contributing to lows like this one coming in on Monday.

Severe weather risks expand across both islands, but mainly the South Island and lower half of the North Island.

You can see all the current MetService tax funded warnings and watches right here: www.weatherwatch.co.nz/maps-radars/warnings/metservice. WeatherWatch expects some additional watches and warnings to be added over today, tonight and the next couple days ahead as this unsettled pattern continues after the low has gone.

Generally speaking this is not a major event – even though it looks like the whole nation is in for a storm, it is not.

But the winds will squeeze through some areas as the low moves in – and that will ramp up the winds for some sections, so the public should be up to date with the risks where they are.

If you look at the tax funded MetService map above you’ll notice a lot of “low” and “moderate” confidence for certain events in both islands. So some areas may be borderline for severe weather – in other words, just unsettled spring-like weather. Others could have damaging winds and flooding rains with slips, so it’s worth being up to date.

Why is New Zealand so windy when I think it should be calmer?

As always, refer to your local WeatherWatch.co.nz and www.RuralWeather.co.nz HOURLY forecasts to make sense of timing of wind, wind directions, temperatures and expected rainfall locally. Keep up to date with tax funded MetService warnings and watches here: www.weatherwatch.co.nz/maps-radars/warnings/metservice