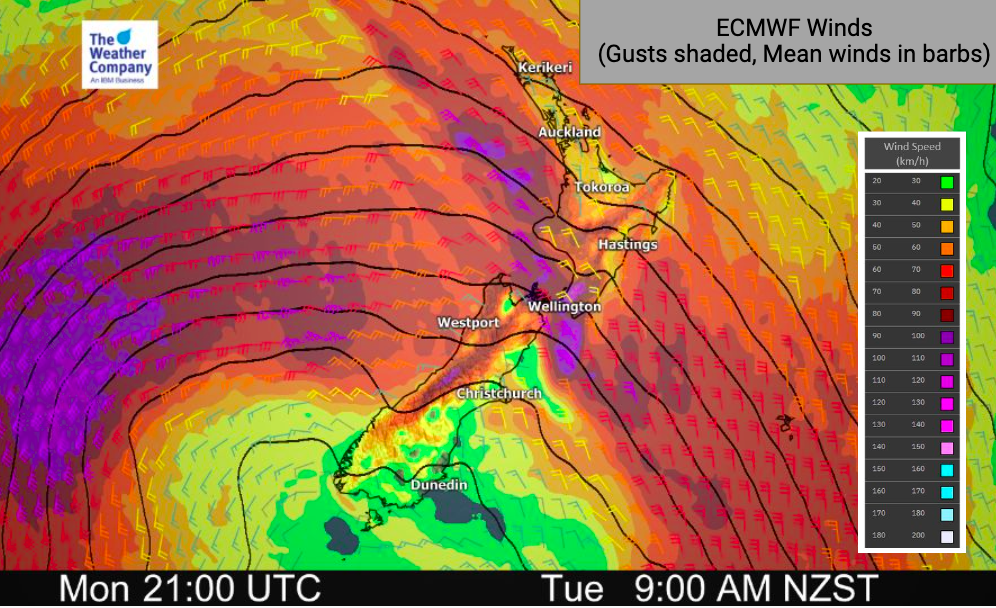 Heavy West Coast rain, heavy alpine snow and severe gales in exposed central parts of NZ – while those not in these areas have a burst of windier then cooler weather coming through.

It’s the next instalment in the show we call ‘Winter’ and it’s coming to a place near you over the next two days!

This is normal August weather but does have a number of severe weather risks across the country – which we outline below.

THE SET UP:
A large low south of NZ will brush us from Monday to Wednesday, impacting various parts of the country. It’s not as intense as the weather last Monday but does bring severe weather risks into both main islands, especially on Tuesday. The low isn’t really a storm – but does press into higher pressure north of NZ helping to create windier weather.

RAIN:
This is a West Coast rain event for the most part with some heavier falls as far north as Mt Taranaki/Mt Ruapehu in the North Island. But rainfall totals diminish the further north you go on the western side of NZ and increase as you head south towards (and into) Fiordland. Showers will be more likely elsewhere with lower accumulation. NZ’s most accurate rain forecast data is powered by IBM and can be found at WeatherWatch.co.nz, our free WeatherWatchNZ App and at www.RuralWeather.co.nz – hyper-local totals for where you live and work.

SNOW:
Heavy in the usual places – the Southern Alps and the South Island ranges, also Mt Taranaki and the Central North Island volcanoes. While a few flurries may flirt with lower down areas in Northern Southland it’s mostly just a cold pulse of air moving through. Both Tuesday and again on Friday will be the coldest days of the week in the lower part of the South Island.

COLD AIR/WIND CHILL:
Windchill will be tough for newborn lambs in particular later Tuesday and into Wednesday, then eases. You can view your hyper-local windchill calculator (every hour for the next 10 days out) exclusively at www.RuralWeather.co.nz.

Basically milder W to NW winds precede the cold front – which moves into the lower South Island on Tuesday and more nationwide by Wednesday. It’s not a major cold event for northern NZ but will see a cooler week ahead. In fact this week is average to below average temperature-wise nationwide… the first time in some time that has happened.

GALES:
West to NW winds build today and rise to severe gale force overnight and into Tuesday in the usual exposed areas (like Cook Strait and the lower North Island). Most exposed looks to be through the Southern Alps and about Central NZ with Wellington and the Marlborough Sounds most exposed on Tuesday morning to NW Severe Gales.