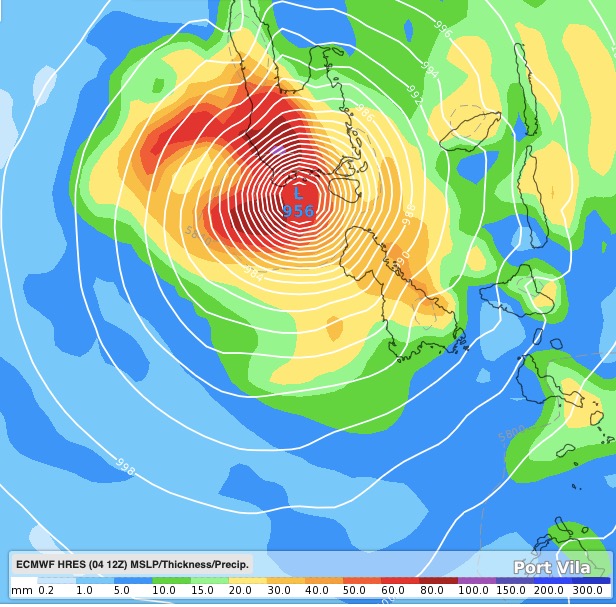 The situation became more serious overnight Saturday when the storm exceeded initial Government forecasts issued by Australia, Fiji and Vanuatu. Last week WeatherWatch.co.nz said Cyclone Harold could be the most serious cyclone of the 2020 South West Pacific Cyclone Season due to the fact it could become severe and make landfall directly in a populated place. All other cyclones this season have been almost entirely at sea and weaker.

For now, Port Vila looks less exposed to a direct hit but is still close enough for that to change, but several other islands to the north are now directly exposed to a very serious Category 4 cyclone building on Monday, crossing overnight Monday/Tuesday morning and departing across Tuesday.

On Sunday Fiji Met forecasters thought Harold might reach Category 5 on landfall but have backed off from that as of Sunday evening. (The maps below are live updating).

The slightly more northern tracking does make the south east corner of Fiji more exposed to Cyclone Harold too, although a direct hit still looks unlikely with the storm expected to remain offshore and still a fair distance from Nadi.

Those in both Vanuatu and Fiji should be closely monitoring this forecast.

Harold’s centre should remain well north of New Caledonia and will not impact New Zealand in any serious way.

TRACKING MAPS BELOW ARE LIVE DIRECT VIA FIJI MET: