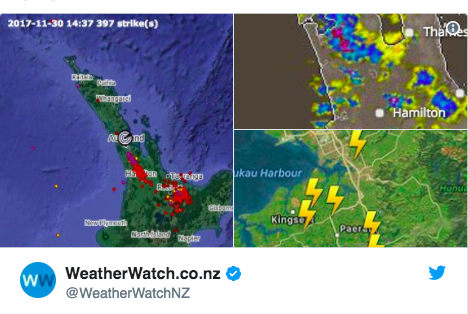 UPDATED 4:30pm — Thunderstorms are continuing this afternoon across central and northern regions of the North Island.

There are widespread downpours across South Auckland, Waikato and Bay of Plenty in particular.

Storms will be peaking now until early evening.

There are a number of hot spots where big downpours and thunderstorms are flaring up.

Some of the biggest downpours are currently in western Waikato.

#NOW: A number of ‘hot spots’ in the upper half of the North Island all ripe for thunderstorms, hail, intense downpours & possible severe weather.https://t.co/7QnRIQ7y9Q pic.twitter.com/nwytcYB79B

Surface and flash flooding are possible, along with hail and cloud to ground lightning strikes. WeatherWatch.co.nz says there may be delays for motorists and those flying in or out of Auckland Airport with intense thunderstorms and rain in the area.

As of 3:25pm most of the biggest downpours were moving away from the airport area, but still nearby.

There are also thunderstorms and intense downpours in Central Plateau and also the mountains of the Upper South Island.

Storms and downpours usually peak from mid to late afternoon to early evening. Downpours are now developing over Auckland and could lead to surface flooding/water on highways and roads. Thunderstorms may also develop in the city this afternoon, however they will be isolated with sunny areas around the fringes.

You can LIVE TRACK the thunderstorms here.

It’s not just New Zealand dealing with thunder – all across Australia big thunderstorms have been occurring with even more on the way over the next 72 hours.

This image below by our partners at The Weather Company shows where all the thunderstorms were as of yesterday evening. 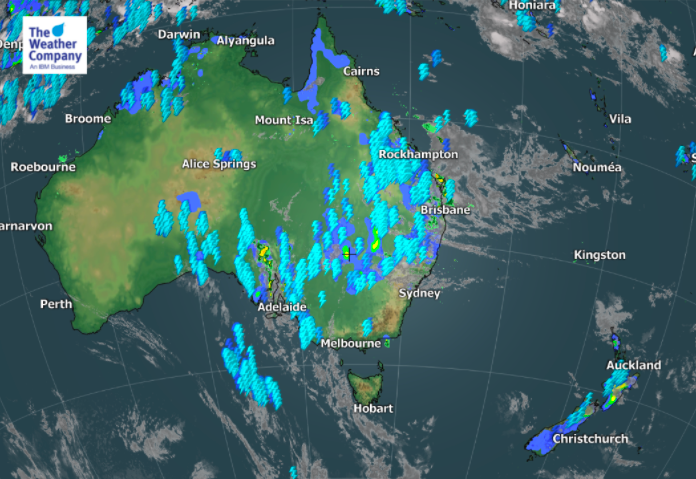 #Auckland: Thunderstorms & heavy downpours developing over the city & moving in from the Waikato area. https://t.co/pMJoYTXSlK pic.twitter.com/MhZ1mr9LdG