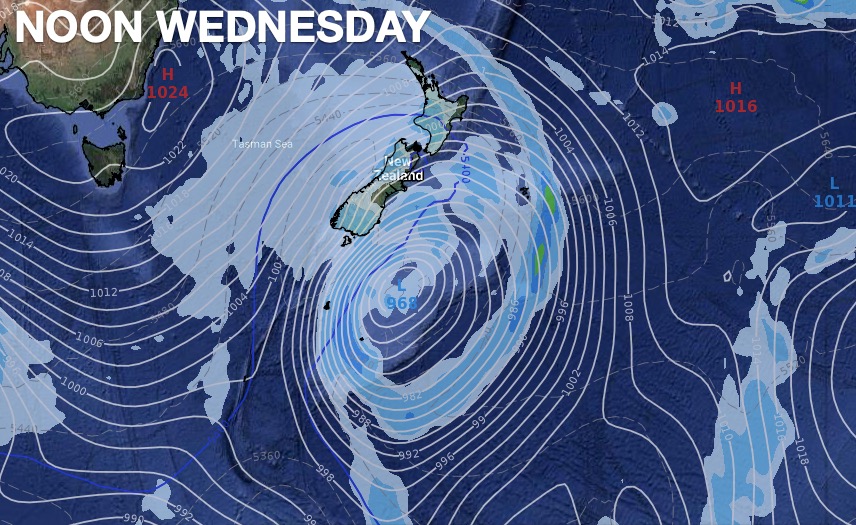 An unseasonable change is on the way – brought on by two significant storms tracking very near NZ in the Southern Ocean.

The first storm tracks past on Sunday while the larger low will move through on Wednesday – dredging up an incredibly cold change for summer with daytime highs likely failing to even reach double digits in some places.

NZ’s location on earth means we do sometimes get a sudden dramatic cold change in summer – but this one is more potent than most and it comes with severe gales.

Snow flurries will start on the Southern Alps as early as tonight and tomorrow with heavier snow likely with the mid week southerly change.

Windchill will get down to freezing in Northern Southland and other areas inland. According to the windchill forecast at www.RuralWeather.co.nz Dunedin will feel like +6C at 12 Noon on Wednesday (with an air temp of around 10 or 11).

But for those in Fiordland National Park that is where a true wintry change will hit. RuralWeather.co.nz (powered by IBM Watson) says the daytime high for Milford Sound is currently just +5C on Wednesday as this main southerly comes in. The windchill factor will make it feel like just +1C at midday.

“Trampers, campers and hikers in these areas will need winter gear and be prepared for blizzards higher up in the ranges” says head forecaster Philip Duncan. “If this was happening in August we’d be looking at a significant sea level snow event for the lower South Island. A stormier than usual Southern Ocean since spring 2020 is the driver of this much colder than usual change for parts of NZ”. WeatherWatch.co.nz exclusively said in spring that La Nina would only moderately impact NZ, partially due to this factor.

While all of NZ will get a cool down the top of the nation will be less exposed. “Auckland will drop down to maybe 19 degrees as the daytime high on Wednesday but it will be the westerly winds that may be of more notice with at least three or four windy days in a row on the way with gusts to gale force at times” says Duncan.

Northern and eastern parts of both islands will likely have limited rainfall with below average rainfall still expected there.

But the windy weather will impact those camping in eastern parts of the North Island. Hahei in the Coromandel Peninsula will have a couple of days around 19 degrees this week with windy westerlies possibly gusting near gale force for a time – or blustery. Lighter winds return by Friday/the weekend in most regions.

Winds will be stronger the further towards Central NZ you are. Wellington will be in the thick of it.

Regions up to Taranaki will also experience strong winds up to gale force as the air is funnelled through the Cook Strait area. Thunderstorms are possible in the west too, of both islands.

Canterbury will be partially sheltered from these systems with temperatures not dropping below the late teens in Christchurch. However the winds will ramp up on Tuesday with gusts to 100km/h possible in Christchurch (enough to break tree branches) and further inland winds may be over 120km/h, possibly over 140km/h in the mountains.

On top of all of this, waves of over 12 metres are expected to crash into the lower half of the South Island’s West Coast by mid week. While remote, we’re in peak summer with a lot of people exploring parts of NZ they’ve potentially never explored before. Big swells will spread up the west and south of both main islands. This is not the usual cool change in summer – this upcoming weather is being generated by two powerful storms in the Southern Ocean and severe weather is highly likely.

You can keep up to date with all tax funded MetService weather warnings here. Some warnings and watches are now showing up.

We’ll have more more maps and details in a special update on Sunday before noon.

Unreasonable?? You mean you can’t put salt and pepper on it? Get a grip. The word is UNSEASONAL.

‘Unseasonal’ and ‘unseasonable’ are both acceptable English and both mean the same thing basically. However you using the term “get a grip” is ‘unreasonable’. 🙂
Cheers
– WW

What are the dark green areas on your temp variation maps representing. There is no legend for these.

The dark green is the land underneath. If you watched the videos you’d know as he explains it just about every time.

What a waste of cold air having a system like this in what is probably the warmest week of the summer.
Tropical air in winter and Antarctic air in summer just doesn’t seem right!
Still, makes for a memorable summer break in the southern regions.