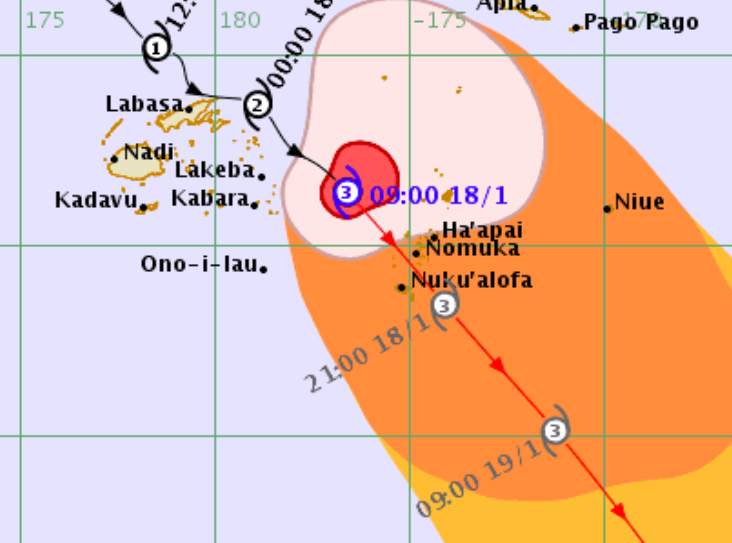 BREAKING NEWS — Tropical Cyclone Tino is now a ‘Severe’ Category 3 storm as it moves directly towards Tonga today. This is not good news for Tonga with a direct or near hit likely this evening.

Tino will be north east of NZ by Monday as an ex-cyclone.

There is currently no direct threat to New Zealand but WeatherWatch.co.nz says offshore storms will make some eastern beaches more dangerous in the North Island, especially around Monday and Tuesday and it’s important to highlight the increased risk at some of beaches as the weather above may be sunny and pleasant.

TONGA – SATURDAY:
Cyclone Tino is now moving in quickly from the NW and is stronger than forecast.

Tino has increased in power above initial forecasts and is now a “Severe” Category 3 Tropical Cyclone (on a scale up to 5).

The centre of the storm will either cross directly over the island nation – or very nearby – later today/tonight.

Torrential rain, severe coastal flooding, damaging winds which can destroy weak buildings entirely plus dangerous seas and storm surge can all be expected across Saturday and tonight. This storm has now increased in strength to the point that *all* people in Tonga must be prepared immediately for damage.

The positive news is that it will be gone and clearing by Sunday morning. Perhaps a bit windy still but easing.

NEW ZEALAND (OFFSHORE FROM SUNDAY PM TO NEXT WEDNESDAY):
Tino will become an ex-tropical cyclone this weekend as it moves far enough south from warm waters. WeatherWatch.co.nz expects the remnants of Tino to really grow and intensify well to NZ’s east into a much larger extra tropical low.

This storm is a long way offshore and shouldn’t affect NZ’s weather at this stage – but the big size and close nature means it’s worthy of WeatherWatch.co.nz issuing alerts for eastern beaches of the North Island with Monday and especially Tuesday the highest risk for more dangerous conditions in the water. Swells over 4 metres may be generated around some parts.

Weather on land will likely be hot, sunny and settled in many places, masking the offshore dangers bringing random large waves and stronger than normal rips and currents. 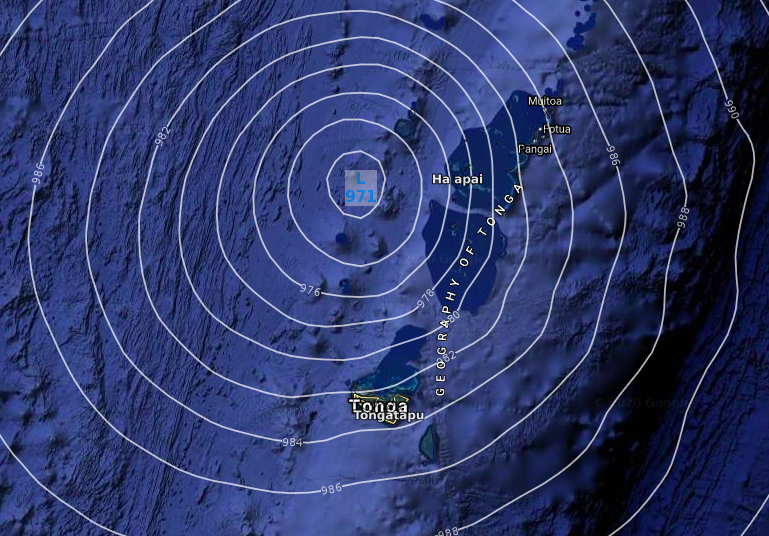 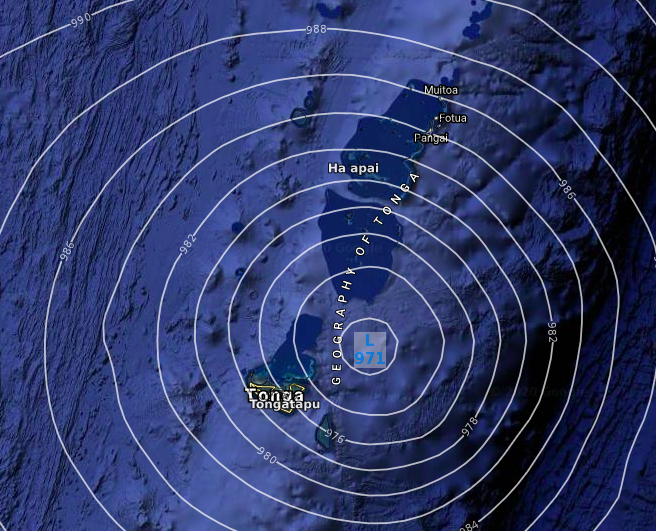 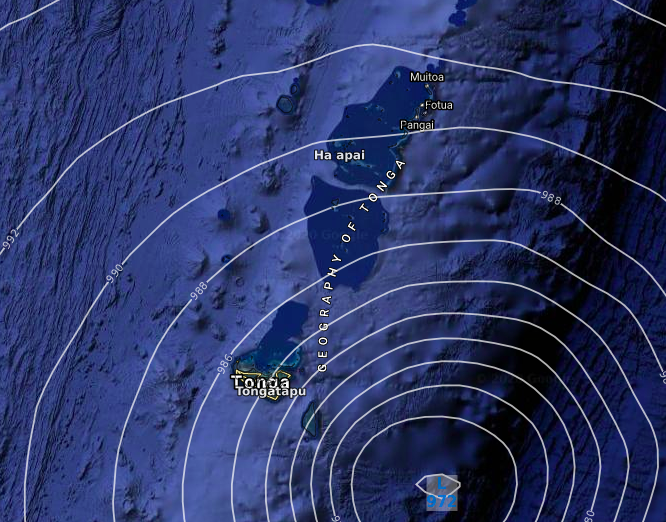 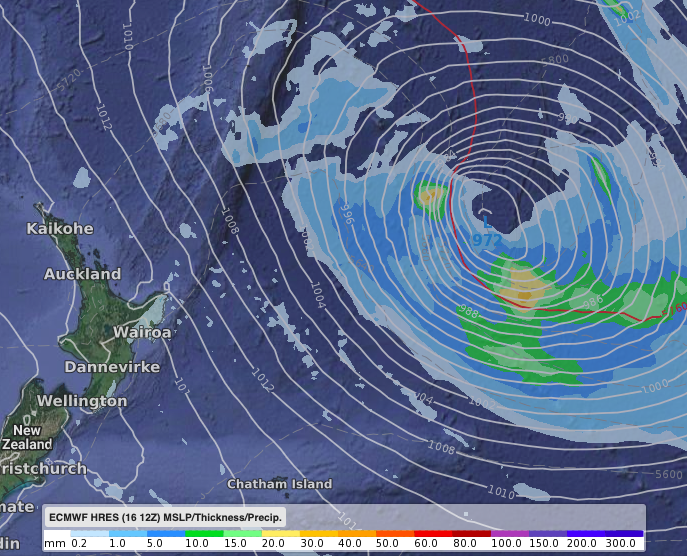 10AM TUESDAY (SWELL MAP). If the storm stays as far east as this map shows then NZ beaches will be brushed by larger waves and stronger rips for a few days. If it moves closer beach erosion can be expected. If it moves further out to the east it will minimise swells and wave heights in the North Island’s eastern beaches. Either way, Monday and Tuesday appear to pose higher risk of eastern beaches being more dangerous… 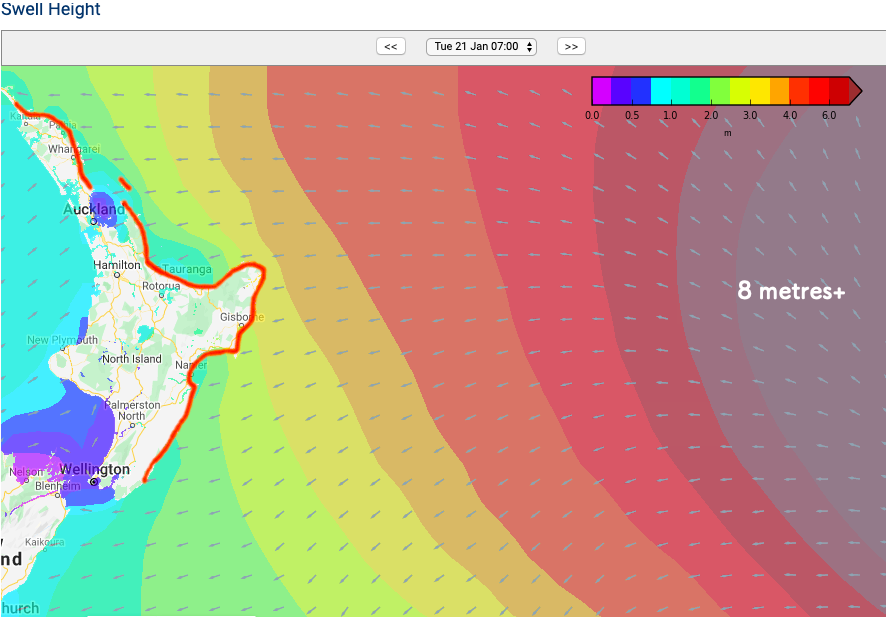 ABOVE: FIJI MET
BELOW: JTWC (US Govt) 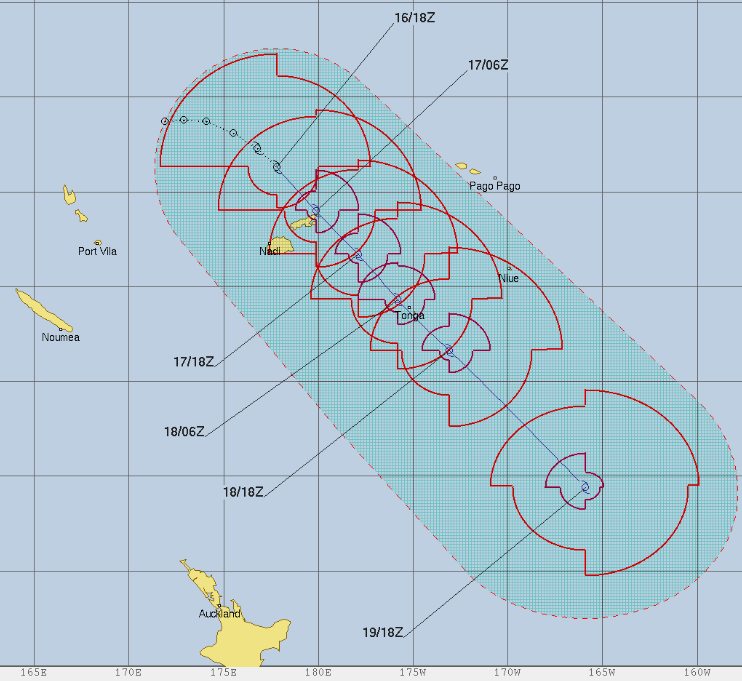