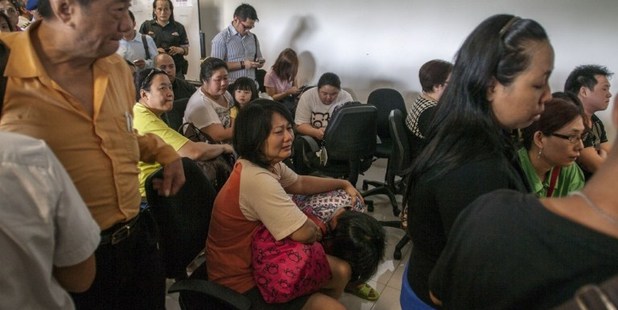 Distraught families of the 162 people missing on board an AirAsia flight from Indonesia to Singapore were gathered at airports late last night awaiting news.

Flight QZ8501, expected to take about two hours with the budget air travel carrier, was supposed to land at 8.30am (Singapore time) at Changi Airport.

However, about 45 minutes after the Airbus A320-200 left Juanda International Airport in Surabaya, it was clear something had gone wrong.

The Indonesian Transport Ministry said the air traffic control tower in Jakarta last heard from the jet at 7.12am.

It had requested to shift from its planned path because of bad weather, and climb to 38,000ft, said Transport Ministry aviation director-general Djoko Murjatmodjo.

“The plane was in good condition. The weather wasn’t good. That’s why the pilot asked to leave the path … to avoid cloud.”

Five minutes after the request was made, all contact with the jet was lost.

The aircraft had enough fuel for three hours’ flying time from the point they lost contact, Mr Murjatmodjo said.

On board were 138 adult passengers, 16 children, a baby, as well as the two pilots and five cabin crew.

AirAsia said 156 were Indonesians, three South Koreans and one person each from Singapore, Malaysia and France.

Relatives of the passengers of AirAsia flight QZ8501 comfort each other at Juanda International Airport in Surabaya, East Java, Indonesia. Photo / A

But late last night, the Foreign Office in London said a British national had also been on the flight.

The captain was identified as Iriyanto – many Indonesians use only one name.

He had 6100 flying hours to his credit, and the first officer had 2275 hours, AirAsia said.

On Christmas Eve, Desano wrote on Twitter: “Merry Christmas to all my beautiful friends who celebrate it.”

He also posted a picture of himself wearing his AirAsia identification tag.

With a huge search and rescue effort under way, dozens of relatives of those on board gathered at Changi and Juanda airports.

Many of them made calls on their cellphones and wept; others looked dazed.

As news of the plane’s disappearance spread, more family members arrived at the crisis centres.

Mr Murjatmodjo said the search was focused on an area between Belitung island and Kalimantan, on the western side of the island of Borneo – about halfway along Flight QZ8501’s route.

Three Indonesian air force planes were scouring an area of the Java Sea southwest of Pangkalan Bun in Kalimantan province.

Singapore had offered the help of its air force and navy as well. Australian offered a P3 Orion.

There were also reports on China Central TV that wreckage had been found on Belitung, but neither AirAsia nor search and rescue authorities confirmed the information.

AirAsia, which operates in most of Southeast Asia and recently started services to India as well, has never lost a plane before.

However, the disappearance of its flight yesterday comes at the end of a disastrous year for Malaysian aviation.

Malaysia Airlines Flight MH370, carrying 239 people, vanished in March after inexplicably diverting from its Kuala Lumpur-Beijing course. No trace of the aircraft has been found.

In July, another Malaysia Airlines plane went down in rebellion-torn eastern Ukraine.

It was believed to have been hit by a surface-to-air missile, and all 298 people on board were killed.

Malaysia Airlines tweeted a message of support for AirAsia, saying: “Our thoughts and prayers are with all family and friends of those on board QZ8501,” with the hashtag “stay strong”.

According to the flight-tracking website Flightradar24, the aircraft was six years old. The website also said Flight QZ8501 was flying at 32,000ft, the regular cruising altitude for most jetliners, when the signal from the plane was lost.

There are 3606 A320s in operation worldwide, according to Airbus.

The A320 family of jets, which includes A319 and A321, has a very good safety record, with just 0.14 fatal accidents per million takeoffs, according to a safety study published by Boeing in August.

Malaysian Prime Minister Najib Razak expressed solidarity with AirAsia. He tweeted: “Very sad to hear that AirAsia Indonesia QZ8501 is missing. My thoughts are with the families. Malaysia stands ready to help.”

“My only thoughts are with the passengers and my crew. We put our hope in the SAR [search and rescue] operation and thank the Indonesia, Singapore and Malaysian governments.”

The former record industry executive, who took over in 2001 and implemented a successful low-cost, low-overhead business model, said he was heading to Surabaya, where most of the passengers and flight staff were from.

Mr Fernandes hit headlines this year when – shortly after MH370 disappeared – AirAsia’s in-flight magazine suggested its own pilots would never lose a plane.

“Rest assured that your captain is well prepared to ensure your plane will never get lost,” it read.

Mr Fernandes apologised for the statement, which AirAsia insisted had not been aimed at its rival airline – the magazine was printed before MH370’s ill-fated flight.

In Washington, the White House said United States President Barack Obama had been briefed on yesterday’s disappearance. The Administration was monitoring the situation.