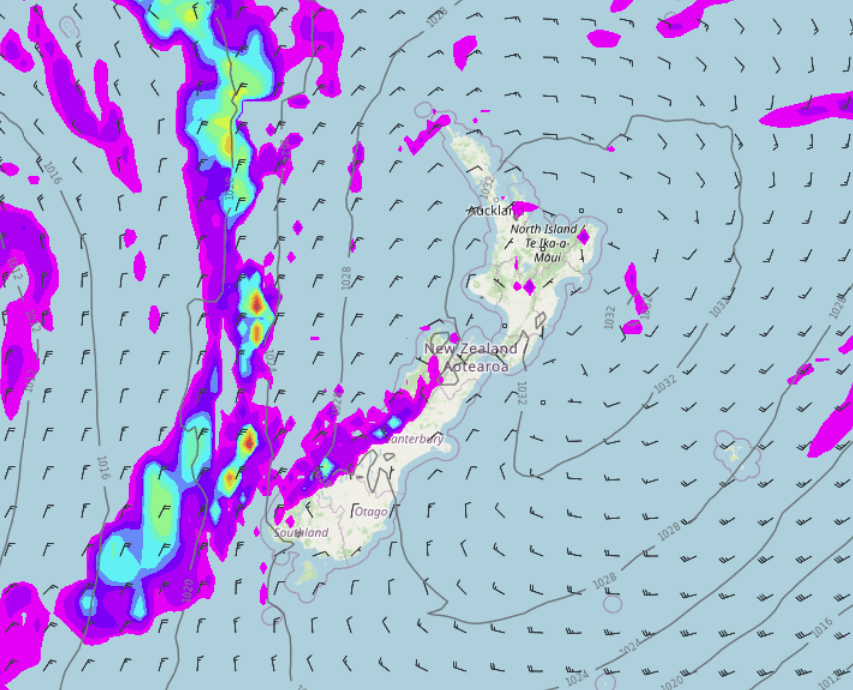 A northeasterly airflow starts to move over New Zealand today as an anticyclone shifts out to the east.

Most regions are fairly dry, a few showers for the West Coast though, turning to rain about South Westland this evening.

Northland, Auckland, Waikato & Bay Of Plenty
Partly cloudy with high cloud starting to creep in from afternoon, some low cloud or fog to start the day for some inland areas like the Waikato. Light northeasterlies.
Highs: 17-19

Eastern North Island
Mostly sunny, there could be some morning low cloud about then clearing away. Light winds.
Highs: 16-18

Marlborough & Nelson
Partly cloudy skies, cloud may be more frequent for Nelson especially in the morning. Light winds tend to the north in the afternoon.
Highs: 15-17

Canterbury
Any morning low cloud or fog breaks away, mostly sunny otherwise with high cloud starting to push over from the west afternoon on wards. Light winds, tending northeasterly across the plains in the afternoon.
Highs: 10-13

West Coast
Cloud thickens up in the morning, a shower or two from afternoon then rain moves into South Westland in the evening, becoming heavy overnight. Northeasterly winds.
Highs: 14-16