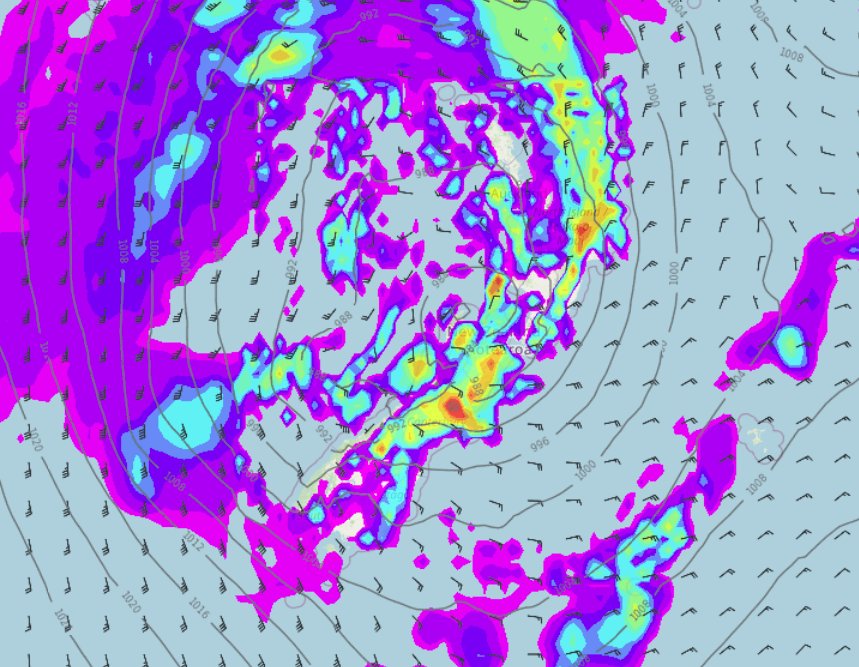 Unsettled for most New Zealand regions today with a deep low pressure system controlling the countries weather and bringing in heavy rain for some regions.

Most regions see rain or showers today, rain may be heavy for some regions.

Northland, Auckland, Waikato & Bay Of Plenty
Rain with a few heavy falls, easing to showers in the afternoon as northerlies tend a little more northwest. There could be a thunderstorm in the morning for Great Barrier Island and the Coromandel then perhaps Northland for a time in the afternoon.
Highs: 15-17

Western North Island (including Central North Island)
Cloudy with rain about Taranaki spreading elsewhere in the morning, there may be a heavy fall or two then easing from the west afternoon onwards. North to northeasterly winds.
Highs: 10-15

Eastern North Island
Some morning sun but expect high cloud to thicken, rain moves over in the afternoon then clears overnight although remaining about Wairarapa. Northeasterly winds freshen then changing northwest around midnight.
Highs: 14-17

Wellington
Cloudy with the odd spit or shower, rain develops in the afternoon, perhaps becoming heavy overnight for a time. Easterlies.
Highs: 13-14

Canterbury
Showers, perhaps some rain mainly inland. In the evening rain becomes widespread and heavy, especially inland. Southeasterly winds freshen later in the day. Expect heavy snow above 1000m, it may get down to 800m for South Canterbury then lifting a little from evening.
Highs: 8-12