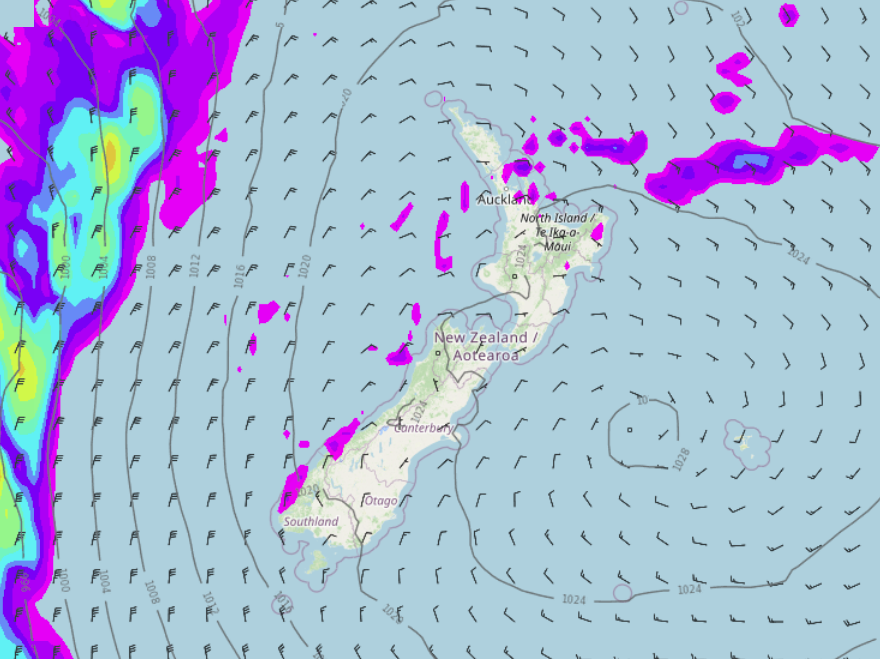 An anticyclone brings mainly settled weather today for New Zealand, a shower or two is about for some parts of the North Island but nothing very dramatic. More details in the forecasts below.

Northland, Auckland, Waikato & Bay Of Plenty
Mostly sunny, cloud becomes a little more frequent from afternoon. A shower or two for western Bay Of Plenty and Coromandel from midday. Light winds tend east to northeast in the afternoon.
Highs: 15-16

Eastern North Island
Cloudy areas for Hawkes Bay and Gisborne, a shower or two also then drying out in the evening. Wairarapa has a mix of sun and cloud. East to northeasterly winds.
Highs: 13-14

Canterbury
Sunny after a frosty start, light winds then northeasterlies pick up in the afternoon across the plains.
Highs: 7-11

West Coast
Mostly sunny, some cloud about Fiordland may bring a coastal shower or two. Cloud then increasing elsewhere later in the evening. Northeasterly winds.
Highs: 11-14

Southland & Otago
Mostly sunny with a touch of high cloud from afternoon, light northerlies inland. Northeasterlies pick up a little in the afternoon for coastal Otago.
Highs: 10-14