Saturday’s forecast – Gales in the south, more settled in the north (+5 Maps) 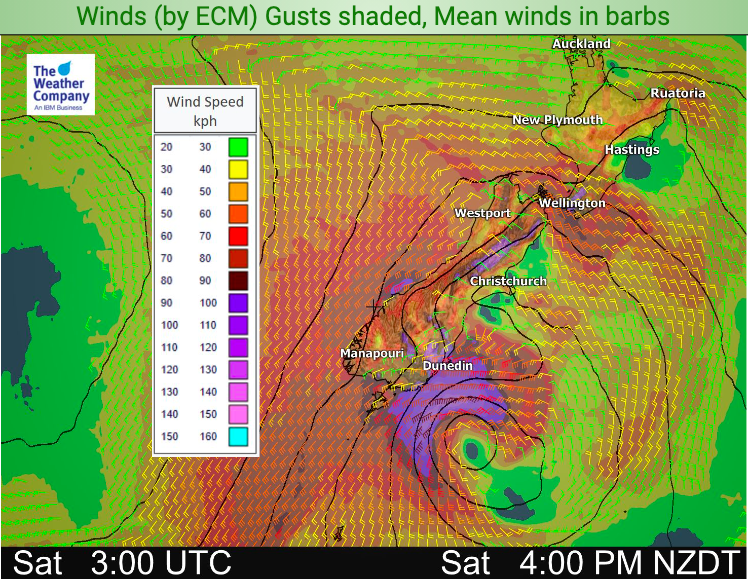 It will be stormy for some in the south on Saturday morning as a small but potent low tracks by. It will bring heavy rain to parts of the West Coast and gales through the mountains and into coastal Otago for a time.

Winds will also surge around Dunedin and Otago Peninsula with the potential for some damaging wind gusts as the low passes by. It’s generally at the lower end of the risk zone, but the risk is still there.

The low will then move out to sea later in the day and conditions ease further going into Sunday.

Temperatures are above average by day in most regions, although the lower western North Island and parts of coastal Taranaki will be cloudier, cooler and about normal for this time of year.

Northland, Auckland, Waikato & Bay Of Plenty
A mix of sun and cloud with westerlies picking up. Mostly dry but can’t rule out an isolated shower in the west. Sunniest and warmest in Bay of Plenty and eastern Northland.
Highs: 19 – 25

Eastern North Island
Fairly sunny but even sunnier weather the further north you are – and hotter too with temperatures in northern Hawke’s Bay and inland Gisborne approaching 30 degrees. Lower daytime highs the further south you go due to increased cloud. A dry day with Nor’Westers for most.
Highs: 20-30

Wellington
Strong NW winds developing, rising to gale in some exposed areas. Mainly dry but a few showers possible as an overnight southerly arrives.
High: 17 or 18

Canterbury
A frost possible in the high country first thing but nor’westers kicking in and a hot afternoon for some in the east. Chance of a few showers or spillover spits here and there, otherwise dry.
Highs: 15-26

Southland & Otago
A cool start then a burst of wind and rain from the south west – meaning those in the east may be fairly dry and mild. Winds from the WNW up to gale in exposed areas and coastal southland. Gusts over 100km/h in the mountains. Rainfall totals highest in Southland. There may be some damaging gusts around Dunedin/Otago Peninsula too.
Highs: 14-22