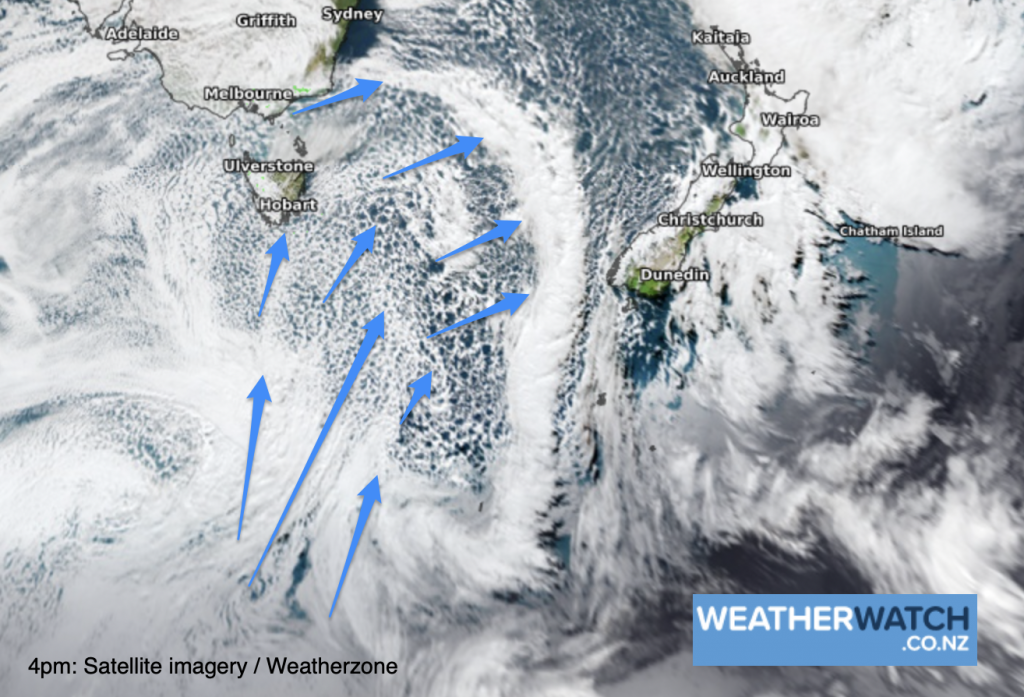 The next surge of active weather from a deepening storm south of the country is about to move in from the south-west. WeatherWatch.co.nz says it’s a classic cold front and is likely to reach Fiordland Thursday evening, Cook Strait area before dawn Friday, and northern NZ Friday morning towards the middle of the day. (Check our hyper-local hourly forecasts for timing/details in your area).

Behind this front comes colder air for some parts of NZ – more significant in the south and noticeable, but minimal, in the very north. It will also kick off windier weather nationwide this weekend and early next week as the storm remains centred south of Stewart Island.

WeatherWatch.co.nz says for many people along the western side of the nation the front will simply produce a burst of rain and wind, which may clear fairly quickly. But the ‘active’ nature of the front means severe weather is possible anywhere along it, as it moves in tonight and across Friday.

An active front means it’s unpredictable and may produce pockets of damaging squalls, small but damaging tornados and severe thunderstorms. In some exposed areas severe gales will ramp up as the front moves through. (see our Live MetService warnings page here). Hail and very heavy downpours are also possible on the western side of NZ and the lower North Island.

“The structure of these fronts can also change quite a bit every hour or so with downpours, squalls and thunderstorms rapidly developing then suddenly fading away to a more gentle shower soon after” says WeatherWatch.co.nz head forecaster Philip Duncan. “This is why some people get confused about what all the fuss is about with warnings, while others up the road may lose a roof and some trees due to an isolated tornado or squall”.

“Unstable weather lines the entire front, but the damaging portions are usually isolated and scattered, as we’ve seen with Thursday’s weather coming in from the west” says Duncan.

The cold front will kick off even windier weather for some places this weekend as a storm in the Southern Ocean continues to deepen. WeatherWatch.co.nz first mentioned the storm possibility last Sunday. Several more active fronts are now expected to move in across the country in the days ahead, but each will be unique in shape and size as the low continues to change shape south of New Zealand.

Coldest air looks to arrive on Saturday in the south with the chance of sea level snow in Fiordland and low level snow in Southland and Otago and parts of the West Coast.

Some eastern parts of NZ will likely have mostly dry weather coming up and some will have plenty of sunny spells too – but these areas may also be windy at times and it will be colder for the eastern South Island than the eastern North Island.

The storm is expected to linger until the middle of next week bringing surges of severe weather and calmer/settled moments too.