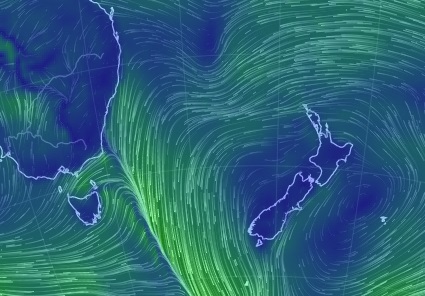 The large ridge of high pressure sitting over the country has been toying with forecasters over the last week, playing a will-it won’t-it guessing game, before finally deciding to stick around for Christmas.

The whole island is sitting under that same ridge, which will mean the settled weather of this week is carrying on into Christmas Day.
An easterly airflow lies over Auckland and Northland however, which for Northland means mainly cloudy skies and the chance of a shower now and then.
Auckland looks mainly dry, but skies could be fairly cloudy – and the day brings the promise of a few sunny areas.

The rest of the North Island is fairly good, with any morning cloud giving way to mostly sunny conditions and light winds, along with afternoon sea breezes.

Inland western parts of the North Island could spring an isolated shower in the late afternoon or evening – otherwise mainly dry conditions prevail.

Temperatures will hover around the low to mid 20s for pretty much everyone.

In the east expect sunny areas and high cloud for everyone south of Banks Peninsula, and mostly sunny weather further north.
Winds for almost the whole island will tend southerly in the morning, then more east to northeast in the afternoon.

Mostly sunny for Nelson after any morning cloud clears, and then some afternoon northerlies, while there is the low risk of an isolated shower about the ranges late afternoon or evening.

High cloud and a few sunny areas for Southland and the remainder of Otago, with light winds and afternoon sea breezes about Southland.

North to northwesterly winds will prevail along the West Coast.
It’s looking fairly cloudy about Fiordland, with sunny spells breaking through in Hokitika, then mostly sunny further north.
A few showers push into Southern Westland during the evening.

Temperature wise, the South Island is looking similar to the north – low to mid 20â€™s for most.
Warmer highs will be for inland areas in the east, while the West Coast is looking a little cooler – in the high teens Greymouth southwards.