Home > News > Round up of the weather at present and w... 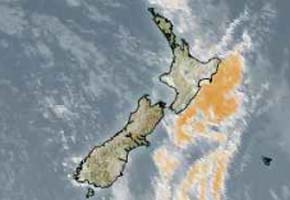 The North Island this morning has had a front move over from the west, most places have had some rain and from late morning conditions have begun brightening up a little as the flow tends more westerly. There is still the odd shower moving through at times from the west and they’ll ease off this evening. On the east coast it is really coming up nice now with places like Napier and Hastings nearly hitting 20 degrees.

In the South Island it’s been another fantastic day out in the east. Christchurch has got up to 19.5 degrees so far with northwesterly breezes, Blenheim and Kaikoura not far behind in the high teens also. However we must beware of the southwest change lurking it’s way up the coast which is now present in Otago and just getting into South Canterbury, initially it may not deliver much more then cooler temperatures, some cloud and the odd shower.

Mid to late evening however a cold trough of air moves over Canterbury and with it brings the risk of heavy showers, hail and thunder more so nearer the coast south of Banks Peninsula so that will be something to keep an eye on. These events do tend to be isolated so depending where you are you may not see much, never the less keep an eye out.