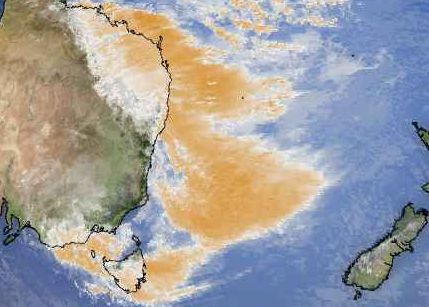 Widespread rain is hitting Queensland, Melbourne has it’s second coldest day this year and one of the most intense thunderstorms in a decade hit Wagga Wagga – and the deep low producing this weather in Australia is heading directly our way.

According to weatherzone.com.au a line of storms hit Wagga Wagga at 2pm on Tuesday dumping about 13 millimetres of rain in just 10 minutes, which led to some flash flooding. The airport’s weather station has not recorded a rain rate that high in at least 10 years.   Wagga Wagga is inland and doesn’t normally see high rainfall.

Lines of storms also affected the Riverina, Lower Western and Central West Slopes and Plains and parts of northern Victoria.

“Over the next few days the low will head east [towards New Zealand], causing winds to turn colder and stronger westerly and bring a few showers” weatherzone meteorologist Brett Dutschke said.

Widespread rain has been soaking central-western Queensland and is now setting in over the state’s southeast, bringing heavy falls and flash flooding, according to weatherzone.com.au.

“The rain is becoming heavy in the Southeast Coast district, where further flash flooding is possible right through to Wednesday afternoon,” said weatherzone meteorologist Brett Dutschke.

“By Wednesday afternoon much of the region will have accumulated 50mm, and there’s potential for near 100mm. This is unusual for August given that it’s one of the drier months of the year,” Dutschke said.