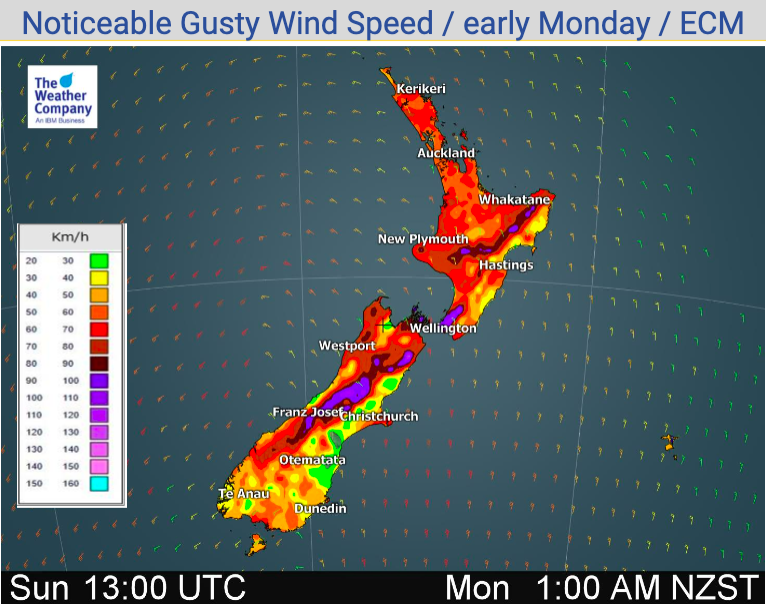 An active cold front, deepening low pressure and strong northwesterly winds are expected to increasingly develop and affect NZ from Sunday to Tuesday.

The cold front is expected to cross NZ Sunday to Monday and bring showers, localised heavy rain, gusty winds – including damaging wind gusts exceeding 90km/h – and isolated thunderstorms as it tracks through.

After the passage of this cold front, other weaker fronts with strong cooler southwesterly winds are expected to generate squally showers, localised downpours, gusty winds, and further isolated thunderstorms.

Rainfall totals could reach up to 100mm or more in the western central coastal districts of the South Island by Monday morning.

The areas with potentially damaging wind gusts exceeding 90km/h should be mainly in the hills and ranges and inland highland parts of NZ on Sunday and over Monday accompanied with the passage of the cold front.

The strongly southwesterly winds are expected to persist over NZ until at least Thursday.

In addition, other fronts are expected to cross NZ on Wednesday to Thursday and another active low-pressure system is expected to affect NZ on Friday to next weekend.

However, the cold changes will be highly noticeable in the South Island on Monday with temperatures tumbling over 10 degrees from Sunday in some areas.

NOT BAD FOR ALL
The further south the centre of this low drops the lower the rainfall totals and wind gusts will be further north. Some parts of NZ, thanks to our mountains and ranges, will not be majorly impacted by this weather.

Some parts of northern NZ have very little wet weather and wind speeds may not reach gale.

To make more sense of this for your local area, please refer to the maps and forecasts at WeatherWatch.co.nz – or drill down even further with the most data on earth for NZ available for free at www.RuralWeather.co.nz