RainWatch – Rain for central parts of the country today 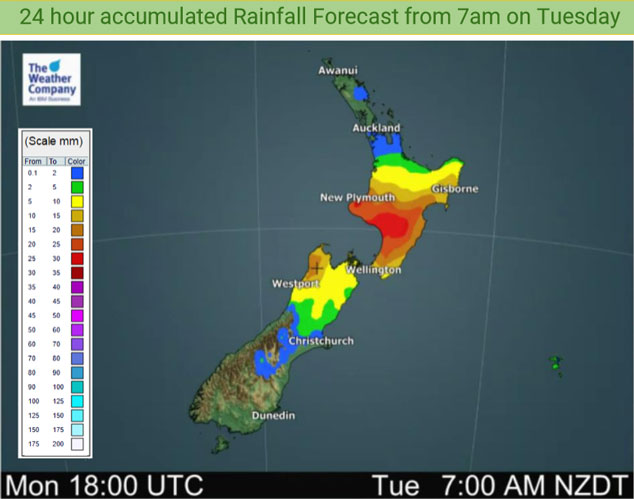 A cold front slows down about central parts of the country today, this may bring some heavy rain to the lower North Island as shown in the red shaded areas below. Only the odd shower or drizzle patch outside of the red / yellow shaded areas. For the likes of Auckland and Waikato, even Bay Of Plenty to an extent, any shower activity is not likely till later today or overnight.

Looking dry for the South Island on Wednesday, expect some rain for the North Island south of about Waikato and north of Palmerston North. Rain will ease to showers from afternoon for most. The blue coloured areas below only represent the risk of a shower.

Moving into Thursday, the airflow starts to tilt to the north over New Zealand as high pressure centre moves out to the east. Dry for the South Island however from afternoon some rain or showers moves into the West Coast.

Taranaki across to Bay Of Plenty sees the odd shower during the day, Waikato through to Northland sees the odd shower also however in the morning expect large dry areas. A few showers creep southwards into Manawatu late afternoon / evening also. Expect dry weather for the eastern North Island.